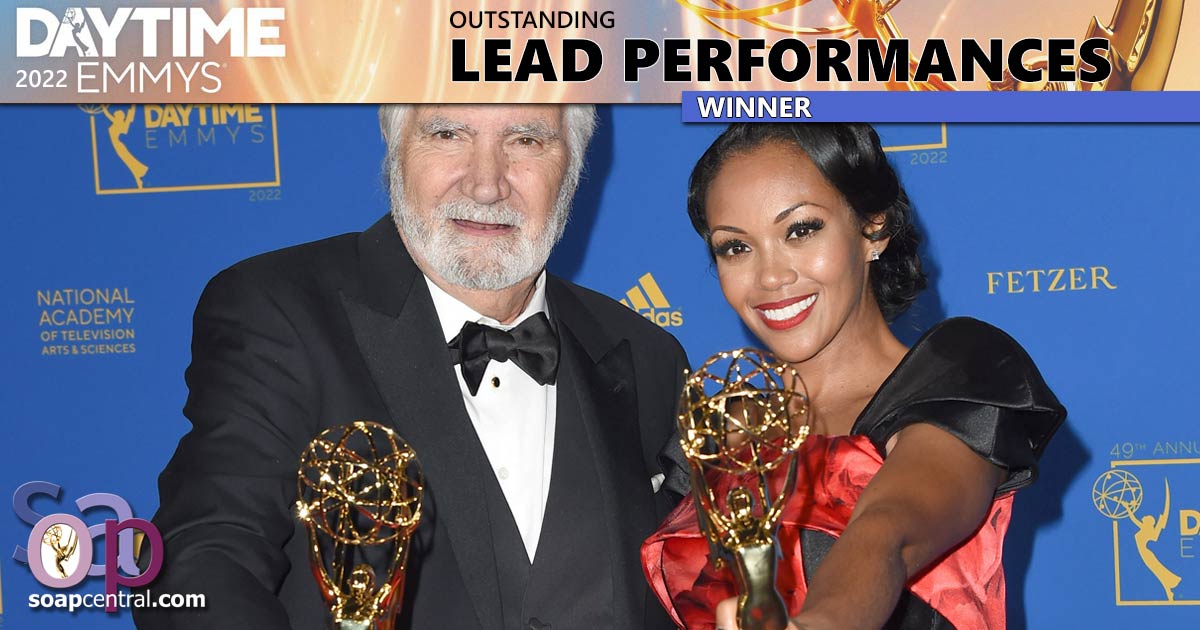 49th Annual Daytime Emmys coverage: The Bold and the Beautiful's John McCook and The Young and the Restless' Mishael Morgan are notable firsts as they are named Lead Actor and Actress.

When it comes to the Lead Actor category at the Daytime Emmys, longtime Days of our Lives star and nominee again this year James Reynolds (Abe Carver) said it best: "It's a heavyweight battle out there. You've got to keep your gloves on!"

And he wasn't exaggerating. Reynolds is a previous winner and was joined in the category by Supporting Actor winner, co-star, and first-lead nominee Eric Martsolf (Brady Black); The Young and the Restless icon, three-time winner, and 23-time-nominee Peter Bergman (Jack Abbott); and Y&R's Jason Thompson, a previous winner.

But it was The Bold and the Beautiful's John McCook, who had never won an Emmy, despite being nominated three previous times, in his 47-year soap career, that took home the Emmy trophy. McCook won for a storyline that is one of the more controversial stories in recent soap memory: a man with erectile dysfunction encouraging his wife to have an affair because he could no longer please her.

"The scenes in [my reel] began with Ridge, Thorsten Kaye, coming to me and saying, 'What are you doing, Dad?! Letting her go off and have sex with somebody else, and then inviting her back into the house like this?' And I had to try to explain it to him, and it was like, 'I hope this never happens to you, Ridge. I hope that you never feel this way'... and I talk about all the kids that left and the ex-wives that are not there and Stephanie's gone and I don't like being in here alone," McCook shared. "[I]t was understated, it wasn't throwing chairs through the window."

"It was very important to me that we played this with dignity, and for him to be sorry for himself was a color we passed through very early and we never went back to that. We stayed with, 'What am I going to do? How am I going to fix this? How can I keep her close to me in my life?' And so, that's why he made the choice that he did," McCook continued. "So, I knew it would be special -- I know that a lot of people wrote in and didn't like it, who disapproved of the solution that Eric had made, but that was good; it means people are watching and are interested. And I had some communication from people who were saying, "I know what you're going through."

McCook talked more about his relationship with Kaye, who plays McCook's son on B&B.

"When he came in, he was a replacement, and it's a very tough gig to get as an actor, but when you're as confident as he is, and he has a good soul, and he's happy to be an actor, he loves doing it, and I sat with him for five minutes, and I knew we were going to be friends," McCook said. "So, working with him in the father/son stuff was some of the favorite stuff that we get to do there. Favorite stuff. I've loved having this whole storyline with Rena Sofer. She was right here with me, so close, every day, to realize this material and try to be real, you know? It's easy to overact this stuff, and a lot of people do. But not the people who are good, and we're here tonight [with] so many wonderful actors who learned a long time ago to do the real thing and make it as real as you can. And that's our job."

McCook, Kaye, and Scott Clifton are the only two B&B actors to be nominated in the Lead Actor category. McCook's win was the CBS soap's second in the category after Clifton's win in 2017.

In a genre that has done it all, everything from satanic possessions to finding ways to resurrect characters whose deaths were clearly un-undoable, it seems hard to believe that there is anything that soaps haven't done. But there was... until tonight. The Young and the Restless' Mishael Morgan became the first Black actress to ever win in the Outstanding Lead Actress category.

"It felt surreal. I kept replaying it in my head, and then it took me a second to realize, 'No, that's not the voice in my head. They actually said my name,'" Morgan said of her winning moment.

It wasn't just the win that seemed surreal. Morgan explained that her character's Emmy-winning storyline was one that hit very close to home.

"It's funny because I started thinking about it a little more, and I was thinking about my dad a lot today, and this was so connected to him in a lot of ways. My dad didn't meet his mom until he was 21. He was raised by her for a few years, but I think around the time he was eight, he ended up in Trinidad, and he didn't meet her again until he was 21," Morgan shared. "And I remembered that when I was prepping the scenes and everything, and then, with everything going on, I was like, "Oh, my God, this is so much my dad's story, and so, it meant so much to me in a lot of [ways], and that was the whole journey on the tape that I had; it was Amanda meeting her mother for the first time, then meeting her grandfather for the first time, who was not her, well, it was her biggest fan, but Amanda was not his biggest fan! [Laughs] And then, you know, kind of breaking down with Devon [Bryton James], saying that she doesn't know if she's doing right by her father, and finally coming full circle and hoping that her father is proud of the work that she did."

Having the opportunity to think about things, Morgan began to cry.

"Playing two characters [Amanda and previously her twin sister, Hilary] and coming on the show was a challenge, but it was one that I was excited to take on, and I'm glad that it paid off. It was really hard thinking about how I was going to play a strong Black woman in a different way and not make her seem the same and make her seem fresh and different and have connections with these same people that I've been working with five, six years prior. But it was exciting, and it reminded me why we do this," Morgan said. "We love to play, and we love to tell stories, and we love to become new people and transcend and send our messages out into the world.

This was Morgan's third nomination and first in the Lead Actress category. This is The Young and the Restless' sixth win in the category.

Complete Emmy Coverage: The 2022 Daytime Emmys, from the red carpet arrivals to the backstage interviews.

THE YOUNG AND THE RESTLESS
Y&R COMMENTARY: How to Get Away with Murder

GENERAL HOSPITAL
GH COMMENTARY: The secrets and lies that bind

THE BOLD AND THE BEAUTIFUL
B&B COMMENTARY: The not-so-full Monte (Carlo)

DAYS OF OUR LIVES
DAYS COMMENTARY: Can I get a witness?

THE BOLD AND THE BEAUTIFUL
B&B COMMENTARY: The not-so-full Monte (Carlo)

THE BOLD AND THE BEAUTIFUL
B&B SPOILER ALERT! Steffy and Li quarrel over Li's decision that kept Finn from his family 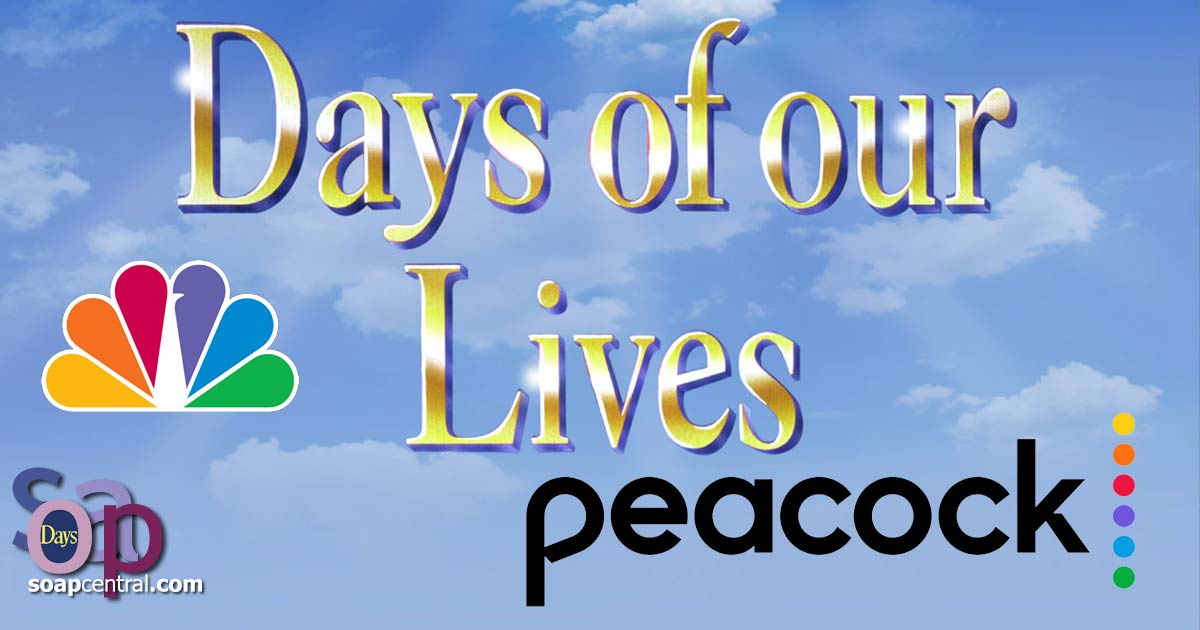 DAYS OF OUR LIVES
DAYS COMMENTARY: Can I get a witness?

DAYS OF OUR LIVES
Alison Sweeney exits Days of our Lives; will it be her final bow?
July 15, 2022

DAYS OF OUR LIVES
Beyond Salem soundtrack now available for Days of our Lives fans
July 15, 2022

DAYS OF OUR LIVES
Richard Wharton joins Days of our Lives as new Dr. Rolf
July 18, 2022

DAYS OF OUR LIVES
Days of our Lives' Victoria Konefal out as Ciara
July 1, 2022
GENERAL HOSPITAL

GENERAL HOSPITAL
GH COMMENTARY: The secrets and lies that bind

GENERAL HOSPITAL
GH SPOILER ALERT! Scott checks in with Ava about the divorce

DAYS OF OUR LIVES
Jake DiMera dies on Days of our Lives; what does that mean for portrayer ex-GHer Brandon Barash?
July 28, 2022

GENERAL HOSPITAL
Steve Burton files for divorce from wife Sheree
July 12, 2022
THE YOUNG AND THE RESTLESS

THE YOUNG AND THE RESTLESS
Y&R COMMENTARY: How to Get Away with Murder

THE YOUNG AND THE RESTLESS
Y&R MONDAY RECAP: Phyllis vowed to Nikki that she would bury Diane (Monday, August 8, 2022)

THE YOUNG AND THE RESTLESS
Y&R SPOILER ALERT! Jack offers Adam a job at Jabot

THE YOUNG AND THE RESTLESS
Robert Newman says goodbye to The Young and the Restless: "Thank you for allowing me to be a part of the legacy"
July 27, 2022

THE YOUNG AND THE RESTLESS
Victoria Rowell to direct The Young and the Restless' Leigh-Ann Rose in Christmas film
June 22, 2022
© 1995-2022 Soap Central, LLC. Home | Contact Us | Advertising Information | Privacy Policy | Terms of Use | Top
SECTIONS
Soap Central
Daily Recaps
The Scoop/Previews
Two Scoops Commentary
Message Boards
Daily Recaps
Daytime Emmys
SHOWS
All My Children
Another World
As the World Turns
The Bold and the Beautiful
Days of our Lives
General Hospital
Guiding Light
One Life to Live
Passions
Port Charles
Sunset Beach
The Young and the Restless
ABOUT
About Soap Central
Contact Us
Feedback
FOLLOW US
Facebook
Twitter
YouTube
Instagram
Pinterest