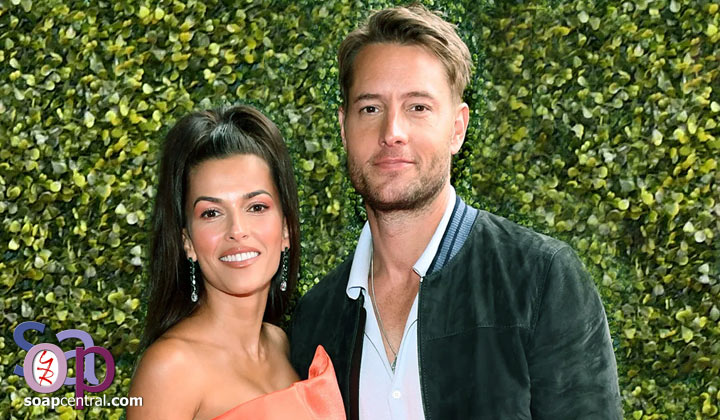 The Young and the Restless alums Justin Hartley (ex-Adam Newman) and Sofia Pernas (ex-Marisa Sierras) have reportedly tied the knot.

Congratulations are in order for Justin Hartley (ex-Adam Newman, The Young and the Restless; ex-Fox Crane, Passions) and Sofia Pernas (ex-Marisa Sierras, Y&R), who are said to have recently gotten married.

The actors made their red carpet debut as a couple during the 2021 MTV Movie & TV Awards over the weekend, sparking rumors of their status as husband and wife by wearing rings on their wedding ring fingers. Though neither has said anything publicly about their marital status, a source confirmed to People that they have officially tied the knot.

News that Hartley and Pernas were a couple first came out in 2020, with both making it "official" on Instagram via a New Year's Eve post. Rumors of their marital status began in early May, after the couple was spotted on the beach in Malibu, wearing bands on their left hands.

As soap fans know, Hartley was previously married to Chrishell Stause (ex-Jordan Ridgeway, Days of our Lives; ex-Amanda Dillon, All My Children; ex-Bethany Bryant, Y&R) for two years before he filed for divorce in November 2019. He was also married to Lindsay Korman Hartley (ex-Arianne Hernandez, DAYS; ex-Cara Castillo, AMC; ex-Theresa Lopez-Fitzgerald, Passions) from 2004 to 2012. The couple share a daughter named Isabella Justice who turns 17 this July.

Hartley currently plays actor Kevin Pearson on This Is Us, having previously starred as Y&R's Adam from 2014 to 2016 and Passions' Fox from 2002 to 2006. His other credits include Mistresses, Smallville, and Revenge.

Sofia Pernas starred as Y&R's Marisa from 2015 to 2016 before going on primetime series like Jane the Virgin, The Brave, and Blood & Treasure.

Would you like to leave a congratulatory message for Justin Hartley and Sofia Pernas? What do you think about the couple having reportedly tied the knot? We want to hear from you -- and there are many ways you can share your thoughts.

About The Actor: Learn more about Justin Hartley.

Who's Who: Read a biography of Adam Newman.