INTERVIEW: The Bold and the Beautiful's Kimberlin Brown "on top of the world" over Emmy nomination 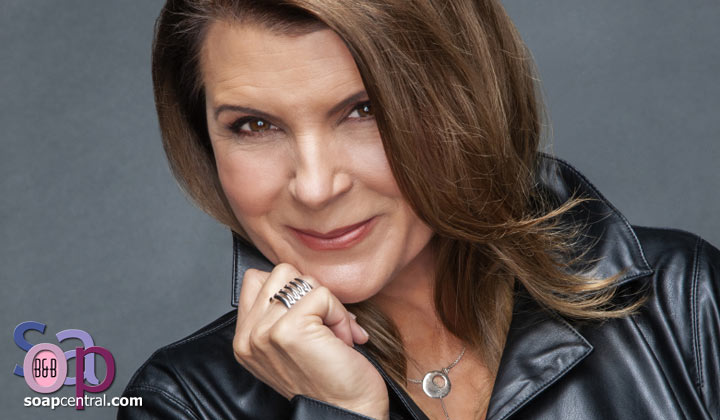 Outstanding Supporting Actress nominee Kimberlin Brown (Sheila Carter, The Bold and the Beautiful) thanks spectacular writing and the show's cast and crew for her Daytime Emmy nod.

Kimberlin Brown's Sheila Carter gave The Bold and the Beautiful fans a shock last year when she unexpectedly popped up during Steffy (Jacqueline MacInnes Wood) and Finn's (Tanner Novlan) wedding with the mother of all secrets: Finn was her biological son! The jaw-dropping reveal led to massively entertaining moments, such as the entire Forrester clan reeling over the news that because Steffy had given birth to Finn's son, they were blood-linked to Sheila, who's been their nemesis for decades.

Brown's work in the storyline stood out for multiple reasons, including the fact that she managed to show Sheila's signature devious side while also giving viewers a glimpse of the villain's softer side while the character attempted to bond with Finn and her new grandbaby, Hayes. Daytime Emmy voters took note, and they honored the actress with an official nomination in the Outstanding Supporting Actress category, bringing Brown's total Emmy nominations to two (she was previously nominated in the same category for playing Sheila Carter on The Young and the Restless back in 1993).

Soap Central: Hi, Kimberlin! What an exciting day! How are you feeling?

Kimberlin Brown: I'm on top of the world, I can't lie. My fellow castmates have been pouring out congratulations and well wishes for me, and it's exciting. It's something that I was never sure would ever happen again for me, but the writing last year was just spectacular, as it is this year, as well, and I was just excited to have a body of work that got me where I am today. It's a group effort, truly, with the writers and producers and directors, everyone behind the scenes, hair and makeup -- everyone put me in this position, and I'm just blessed to be here.

Soap Central: As you said, the material last year was so powerful, and everyone was super shocked with Sheila's return. Was it difficult to narrow down which scenes to submit as part of your reel?

Brown: You know, it really was! Originally, we thought it would be best to tell a story, from point A to the final scene, as far as when I first arrived on the show and what happened along the way to set things up, and then I started remembering other scenes and other pieces that, to me, were just great moments. And when other actors come to you on the show and say, "Boy, I hope you choose this show," or, "I hope you choose that one!" it really jars your memory and it helps you, it truly does. I had Annika [Noelle, Hope Logan] say, "Kimberlin, you've got to put the scene in when you're talking to Steffy Forrester in hell," and I was like, "Oh, my gosh, yes!" Because I've been so busy, and I've have so much to do since I came back, it's a little bit overwhelming, so to have people come forward from the show and help me with their recommendations, it really pulled everything together that was necessary. But, yeah, I don't know really what to say today, to be honest! I'm just very excited.

Soap Central: How did you find out that you'd been nominated?

Brown: I received a call from Brad [Bell, our executive producer and head writer], and it was wonderful. He told me, "Girl, when you make a comeback, you really go all out, don't you?!" [Laughs] It was wonderful. It really was. He said he's been incredibly proud of my work and what I've been bringing to the table and how deserving he thought I was of this nomination. It was just a fabulous phone call to receive.

Soap Central: Have you received any messages from any of your soap colleagues?

Brown: I have! I mean, the list could go on and on, because almost everyone on the show has reached out, and it's been really great. It feels like such a family this time around, more so than I ever felt before, and those calls and text messages and video messages that have been sent to me have just solidified that.

Soap Central: Have you had the chance to share your news with family and friends yet?

Brown: I called my husband and my daughter and my son and my mom, and I did text my brother and my sister, as well. It's interesting because I own an avocado farm, and I'm in the middle of picking right now, so I've been working! I was down working when I got my phone call, and I finally had to just put down the clippers and put down the picking bags with my guys and head up to the house and just started answering phone calls and texts. It's been a lovely day.

Soap Central: Wow, what an interesting dichotomy! You started the day doing farm work in a field, and you're ending it celebrating an Emmy nomination!

Brown: [Laughs] I know! It's kind of funny, right? It's been a really good day.

RELATED: Are Sheila's days numbered? Kimberlin Brown opens up about her B&B status

Soap Central: What do you think about the competition in your category? They say the Supporting Actress category is the toughest one to get into.

Soap Central: Are you the type to prepare an acceptance speech ahead of time?

Brown: No! [Laughs] I've always been one of those "fly by the cuff' sort of people. No, I've never been one to do that, and that's probably why, in the past, when I've accepted awards, the speeches weren't that great! So, I don't know; I'll have to think about it this time around.

Soap Central: What about what you'll wear -- do you think you'll start planning that soon?

Brown: I haven't even thought of that, I'll be honest. I've been blessed in the past to be dressed by some phenomenal designers -- Escada is one of my favorites, and [that's what I wore] the last time I was nominated. That being said, there's a phenomenal designer that I found in Newport Beach, California, who has an amazing, full-length cape dress that I loved, and she said she may be able to put something together for me, so, we'll have to see. The dress is just to die for.

Soap Central: Are you nervous to get back in the swing of big red carpet events? It's been a few years!

Brown: It's always fun to participate and be a part of the Emmy Awards. My fondest memories on the red carpet are meeting Aretha Franklin and so many people outside of the soap world that are truly big fans. I definitely look forward to doing that again.

Soap Central: Do you plan to celebrate your nomination either tonight or this weekend?

Brown: There's definitely a celebration in store, I just need to figure out what day and when. My husband is a little under the weather at the moment, so I need him to get a little healthier, and then maybe next weekend, [my family and I] can all celebrate together!

What do you think about Kimberlin Brown being nominated for a Daytime Emmy award? Do you think she will take home the gold in the Outstanding Supporting Actress category this year? We want to hear from you -- and there are many ways you can share your thoughts.

THE BOLD AND THE BEAUTIFUL
Monday Shocker: B&B's Finn is alive and Li knew all about
May 23, 2022
DAYS OF OUR LIVES

GENERAL HOSPITAL
TWO SCOOPS: General Hospital: The Best and Worst of 2022 (so far)

DAYTIME EMMYS
How Y&R's Cait Fairbanks went from a broken coffee machine to sharing an honor with Beyoncé
May 27, 2022
© 1995-2022 Soap Central, LLC. Home | Contact Us | Advertising Information | Privacy Policy | Terms of Use | Top
SECTIONS
Soap Central
Daily Recaps
The Scoop/Previews
Two Scoops Commentary
Message Boards
Daily Recaps
Daytime Emmys
SHOWS
All My Children
Another World
As the World Turns
The Bold and the Beautiful
Days of our Lives
General Hospital
Guiding Light
One Life to Live
Passions
Port Charles
Sunset Beach
The Young and the Restless
ABOUT
About Soap Central
Contact Us
Feedback
FOLLOW US
Facebook
Twitter
YouTube
Instagram
Pinterest