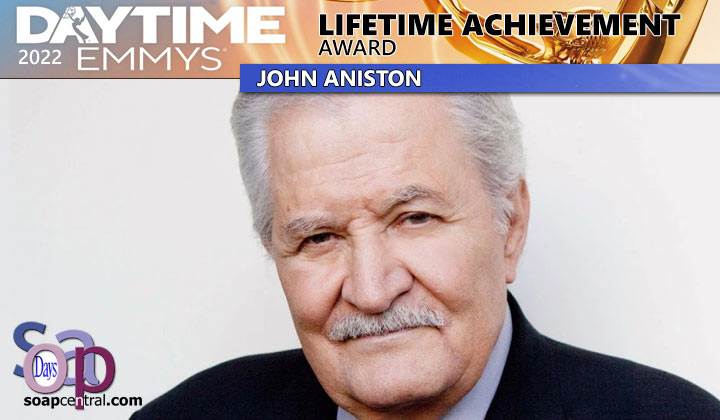 John Aniston will be celebrated for his near four-decade run as DAYS' Victor Kiriakis, as well as for his robust theater résumé that includes both on- and off-Broadway roles.

The National Academy of Television Arts and Sciences (NATAS) has announced that longtime Days of our Lives star John Aniston (Victor Kiriakis) will be honored with the Lifetime Achievement Award at this year's Daytime Emmy ceremony, set to take place on Friday, June 24.

Aniston's acting career spans a whopping 60 years, with the bulk of those decades having been spent playing the role of his devilish yet lovable DAYS character. Daytime fans have loved every minute of his time in Salem, but surprisingly, the 88-year-old has only been recognized in the Daytime Emmy race once in his career: he was nominated in the Outstanding Supporting Actor category in 2017.

"Charm! Victor is just your everyday lovable killer," Aniston joked back in 2017. "When he started out, he even had two hit men on the payroll -- and one of them was Patch Johnson [Stephen Nichols], who's still on the show today. Of course, it helps that the writers give me lines that are real gems. My favorite was when evil Eve [Kassie DePaiva] suddenly came back to town and showed up at Victor's door. He took one look at her, turned around and said, 'Anyone order a hooker?' It's like having Neil Simon write your dialogue. You can't go wrong with good lines -- or, if you do, it's your own fault. It's like this old photographer friend of mine used to say, 'Give me [supermodel] Suzy Parker and I'll give you great pictures'.... I tell that story to young kids now, and I get blank stares. They don't know who she was. [Laughs] Their loss."

RELATED: John Aniston shares DAYS had to fix his hair after he let his famous daughter, Jennifer Aniston, give him a haircut

John Aniston was born on the island of Crete in 1933, but he and his family moved to the United States when he was just two years old. He eventually graduated from Penn State University with a BA in Theater Arts, after which he served in the US Navy as an intelligence officer on active duty in Panama and later in the Reserve, attaining the rank of Lieutenant Commander.

Aniston's acting career started on the stage in the original New York production of the smash hit musical Little Mary Sunshine, which he followed up with dozens of other productions over the years on Broadway, off Broadway, and in regional stock or Equity Wavier Theaters.

Aniston's first on-screen role came in 1962, when he was cast as "Officer #1" in an episode of New Man in the Precinct. He then got into the world of soaps via Days of our Lives, but not as Victor. The actor first appeared in Salem in the short-lived role of Eric Richards, which he played from 1969 to 1970. He then acted in one episode of Love of Life and played the 1980 to 1984 role of Mary Stuart's love interest, Martin Tourneur, on Search for Tomorrow before he circled back to DAYS with the role of nefarious Victor Kiriakis.

NATAS chose to skip handing out Lifetime Achievement Awards in 2020 and 2021 due to the COVID-19 pandemic forcing the ceremonies to be held virtually. The last soap opera stars to receive NATAS' Lifetime Achievement Award include DAYS' Bill and Susan Hayes (Doug and Julie Williams), who accepted the honor in 2018, and The Bold and the Beautiful alum Betty White (ex-Ann Douglas), who accepted the honor in 2015.

What do you think about DAYS' John Aniston being honored with the Lifetime Achievement Award at this year's Daytime Emmys? We want to hear from you -- and there are many ways you can share your thoughts.