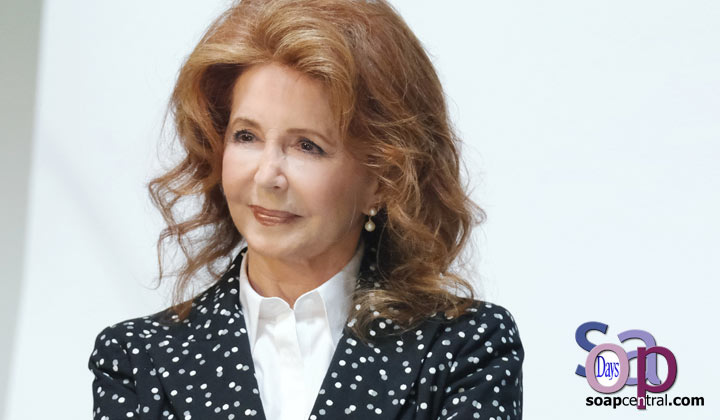 Beloved Days of our Lives star Suzanne Rogers (Maggie Horton) opens up about the terrifying incident that led to her long absence from Salem.

It has been difficult for Days of our Lives fans to go without Suzanne Rogers on their screens -- she and her much-loved alter ego, Maggie Horton, are the heart and soul of Salem! Fortunately, the actress is back to work after a very long hiatus, and now that things in her life have settled, she has decided to share the harrowing details of the health crisis that took her off screen for much of the year.

In a new interview with Soap Opera Digest, Rogers reveals that a freak accident sent her to the hospital last November, and she spent several months following the scary ordeal recovering in rehab.

She explains, "It was last November 18th. I had washed my hair that day and set it in curlers, which I do when I'm going to clean house. I figure that way my hair is set and I'm doing two things at one time. I remembered I hadn't taken one of my horse pills, so, I took the pill and I guess I didn't drink enough water and I thought, 'Gosh, that didn't go down.' So, I drank some more water. Well, then it wasn't going up or down and I got to a point where I thought, 'I'm not breathing really well here!"

Rogers recalls that panic started setting in, and because she lives alone, she decided to call 9-1-1. She managed to choke a few words out, and fortunately, the EMTs arrived within a few minutes. The actress doesn't remember a lot beyond that point, and when she woke up, she was shocked to learn that not only had the curlers burned her scalp and left her nearly bald, but she also had been in the hospital for two weeks!

"It was a scary kind of realization that I had -- I had scabs all over my scalp and I was really kind of scared that I didn't know what was going on," she says.

To make matters worse, the ordeal caused her autoimmune disorder, myasthenia gravis, to flare up, she was worried about contracting COVID in the hospital, and her recovery process required a long stint in rehab -- where she spent Thanksgiving, Christmas, and the New Year's holidays alone due to the no-visitors policy in effect during COVID.

"I didn't think I was ever going to see my house again or my dog. So, that was scary and I prayed a lot," she shares. "It was very frightening on top of being scary. Scary and frightening are two different things to me. Scary is something you can't control; frightening is something that you go, 'Oh, my goodness,' and you manufacture something in your brain that can take you down a really bad road, and I was trying to avoid that."

The actress shares that DAYS' executive producer, Ken Corday, sent flowers and called her on many occasions throughout her rehab stay, which she says helped her get through the terrifying experience. And while she didn't open up publicly about what she was going through at the time, she says, "Somewhere in the back of my mind, I knew people were wishing me well. Whatever was going on, that they were sending me good wishes."

Rogers returned home in early January of this year, and she stepped back into the shoes of DAYS' Maggie in May. She shares that going back to work was a heartwarming moment, but it was also a bit nerve-wracking because she was worried about how the show would handle her hair situation, and she also worried about relearning Maggie's nuances. In the end, the show decided to have Rogers wear a wig -- which she's still doing today, as her hair continues to grow back -- and they have given the actress plenty of time to get back on her feet, acting-wise.

"I felt aflutter at first because I was scared," she shares of her DAYS return. "I thought, 'Oh, my goodness, can I do this?' And obviously I wasn't 100 percent, but I felt that I was well enough. And they were very gracious. They said, 'Look, you just let us know how much you want to work and we will accommodate you.' And that's a biggie because when you know you're not 100 percent, that's very heart-wrenching to me, so I was very happy that I didn't have any pressure whatsoever."

For more from Rogers on her health scare, as well as why she thinks Maggie is almost like a new person now that she's back in Salem, check out SOD's full interview with the actress here.

What do you think about the terrifying health scare that sidelined DAYS' Suzanne Rogers for so many months? How do you feel about having the actress back in Salem as Maggie? Have you noticed a different side to Maggie since she's returned, and if so, are you enjoying it? We want to hear from you -- and there are many ways you can share your thoughts.

About The Actor: Learn more about Suzanne Rogers.

Who's Who: Read a biography of Maggie Horton.

GENERAL HOSPITAL
GH #TBT RECAPS: What was happening the Week of November 22, 2021

THE BOLD AND THE BEAUTIFUL
Get in the yuletide spirit with Soap Central's holiday interview with B&B's John McCook and his real-life daughter, Molly

THE BOLD AND THE BEAUTIFUL
Have Katrina Bowden and Darin Brooks left B&B?

THE BOLD AND THE BEAUTIFUL
Taylor made: Five of Taylor Hayes' most memorable moments

DAYS OF OUR LIVES
Baby on board for DAYS' Billy Flynn and wife, Gina Comparetto

THE YOUNG AND THE RESTLESS
Those DAYS casting rumors involving Y&R alum Daniel Goddard were true!

DAYS OF OUR LIVES
DAYS is in for a dark Christmas: Deidre Hall says possession storyline stretches to December
GENERAL HOSPITAL

GENERAL HOSPITAL
Father of GH's Maurice Benard has passed away

GENERAL HOSPITAL
GH, AMC's Cameron Mathison grieves the death of his mom
THE YOUNG AND THE RESTLESS

THE YOUNG AND THE RESTLESS
Y&R RECAPS: What you missed the Week of November 22, 2021

THE YOUNG AND THE RESTLESS
Jerry Douglas, Y&R's John Abbott, has passed away at age 88

THE YOUNG AND THE RESTLESS
It's Melissa Claire Egan's 10th anniversary at Y&R!

THE YOUNG AND THE RESTLESS
Another Chance: Find out who has been hired to play Y&R's Chance

THE YOUNG AND THE RESTLESS
Mother of Y&R's Michael Damian has passed away
© 1995-2021 Soap Central, LLC. Home | Contact Us | Advertising Information | Privacy Policy | Terms of Use | Top
SECTIONS
Soap Central
Daily Recaps
The Scoop/Previews
Two Scoops Commentary
Message Boards
Daily Recaps
Cast and Credits
Who's Who Character Profiles
Daytime Emmys
SHOWS
All My Children
Another World
As the World Turns
The Bold and the Beautiful
Days of our Lives
General Hospital
Guiding Light
One Life to Live
Passions
Port Charles
Sunset Beach
The Young and the Restless
ABOUT
About Soap Central
Contact Us
Feedback
FOLLOW US
Facebook
Twitter
YouTube
Instagram
Pinterest