Wally Kurth celebrates 35 years at Days of our Lives 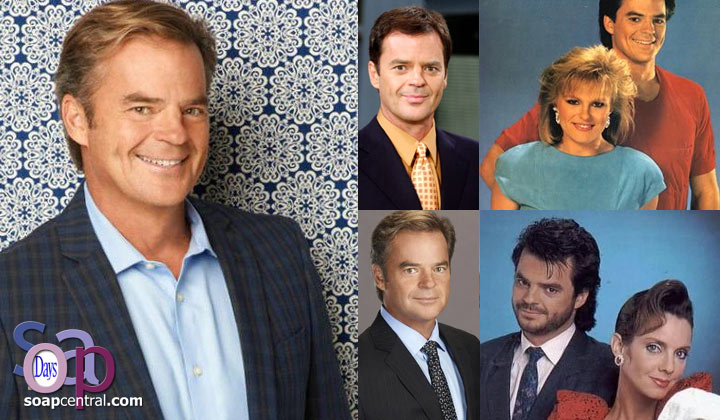 Days of our Lives star Wally Kurth marks 35 years in his role as Justin Kiriakis: "It's been a great run... and still more ground/stories to cover."

For a lot of Days of our Lives fans, it seems like yesterday that Justin Kiriakis rolled into Salem as a playboy who loved the high life and getting cheeky with the ladies. But it was actually a whopping 35 years ago when actor Wally Kurth first graced the screen as Victor's (John Aniston) then-womanizing nephew!

Kurth, who also plays the role of General Hospital's Ned Quartermaine, took to social media to mark his momentous DAYS anniversary. "35 [years] ago I was thrilled to land DOOL. I mean really thrilled- for multiple reasons," he shared. "It's been a great run... and still more ground/stories to cover."

35 yes ago I was thrilled to land DOOL. I mean really thrilled- for multiple reasons. It's been a great run... and still more ground/stories to cover. 🙏❤️😎 #DaysOfOurLives

As longtime DAYS fans may recall, even though Justin's first months on DAYS were wild and carefree -- with the stress on wild, because they included a fling with a married Parisian and a love affair with diva Angelica Deveraux! -- Justin began to change his ways upon meeting and falling in love with Adrienne Johnson (Judi Evans), a poor young woman who had suffered physical and sexual abuse at the hands of her father. Justin and Adrienne went on to have a decades-long on-again, off-again relationship that included multiple marriages -- multiple because, like any soap romance, Justin and Adrienne's life together wasn't exactly smooth!

The pair dealt with a lot of bumpy issues during their early years together, like Victor disapproving of his nephew's impecunious lover; Adrienne miscarrying Justin's child due to stress over his illegal business dealings with Victor; Justin attempting to murder a casual fling of Adrienne's, only to accidentally paralyze himself; Victor drugging Justin to make him impotent; and infertility issues that led to Justin and Adrienne adopting twin boys from Angelica's housekeeper.

RELATED: Alison Sweeney teases her next return to DAYS

In more recent years, Justin and Adrienne dealt with their son Sonny coming out and falling in love with Will Horton, whom they didn't initially approve of; Justin having an affair with his co-worker, Elsa; Adrienne falling in love with Lucas; and Bonnie Lockhart stealing Adrienne's identity and meddling in her love life.

The biggest blow of all came in 2020, however, when Adrienne passed away following a drunk driving accident initially believed to be caused by Maggie. Adrienne's death rocked Justin and saw him almost marrying Kayla before eventually falling in love with and recently marrying Adrienne look-alike Bonnie.

Reflecting on the milestone of playing Justin for 35 years, Kurth says he never thought he'd be in the fictional lawyer's shoes for this long, and he's fascinated by how much Justin has changed over the past three and a half decades.

"Man, to think about a number like 35, it's just incredible. And how lucky am I? I never, ever take it for granted," he tells Soap Opera Digest. "Even though I've been playing the same character for so many years, I'm given all these different stories and the character is different, too. As human beings, we change and we look at the world through different lenses as we get older, and I feel so lucky that I am able to bring those real changes that happened to me to my characters. And hopefully, my characters have evolved just like I have."

He continues, "I think the audience expects that and they can sense the difference; they're not seeing the same character they saw 35 years ago, they're seeing an evolution of a character that is full-bodied and multilayered, and as an artist, I have been given a really lucky hand."

Would you like to wish Wally Kurth a happy 35th anniversary at Days of our Lives? What have been some of your favorite moments from his time playing Justin? We want to hear from you -- and there are many ways you can share your thoughts.