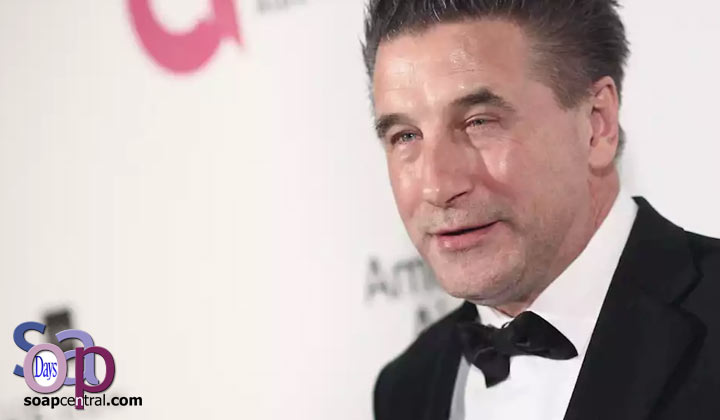 Hollywood star Billy Baldwin reveals he "stunk up" an audition at Days of our Lives for the role of an "Alec Baldwin type" opposite Holly Gagnier (ex-Ivy Jannings).

A lot of major Hollywood actors got their start on soap operas, but not William Baldwin. The New York native, famous for his roles in films like Silver and Backdraft, reveals that while he tried to get a role on Days on our Lives, the NBC soap ultimately passed.

"It was very early in my career. I had just signed with my agent, J. Michael Bloom and Associates," Baldwin shares on Instagram. "Michael had also recently signed Jeanne Tripplehorn, Laura Linney and Anthony LaPaglia... so it was a very exciting and scary time."

The actor shares that he was going on lots and lots of meetings and auditions with casting directors, directors, producers, writers, show runners, and network executives. Some of his auditions went really well, like when he booked the Oliver Stone film Born on the Fourth of July on his second auction, but some didn't go well, like his audition for DAYS.

"I wasn't sure if I wanted to do a soap but was willing to take any and every audition and meeting early in my career so I could have more experience in the room, get over the butterflies and try to make an impression on anybody in the business... so I decided to go for it," he shares.

RELATED: Guess what? All of the main Friends characters were named after characters on All My Children!

"Ironically... I was reading to play the love interest [for] Ivy Jannings. Ivy Jannings was played by the wonderful and beautiful Holly Gagnier," he continues. "At the time Holly Gagnier was the real life fiancé of my brother Alec so we were friends and spent a good amount of time together palling around NYC."

Unfortunately, as Baldwin shares, his audition was an absolute disaster. "To be kind... let's just say I stunk up the room so bad that I didn't even get a call back," he reveals.

To make matters worse, the breakdown for the part actually said the show was looking for an "Alec Baldwin type" -- and who could be closer to being just like Alec Baldwin than the star's actual, real-life brother, William?!

"In the days and weeks that followed that audition my agent, my brother and the lovely Holly Gagnier never mentioned a word to me about how I did. It just disappeared and was never mentioned again as if it never happened," Baldwin shares.

Funny enough, Gagnier is still choosing to keep silent about that day. She commented on Baldwin's post with, "OMG u are too funny. Miss you and hope you're well!!!" Baldwin used that as an opportunity to ask, "Was I that bad???" A fan interjected and said, "She won't tell you to this day. No words needed," to which Gagnier responded, "Thank you. Kindness is the only way xo."

What do you think about William Baldwin's story about his failed audition for Days of our Lives? We want to hear from you -- and there are many ways you can share your thoughts.

About The Actor: Learn more about Melissa Reeves.

Who's Who: Read a biography of Jennifer Horton.