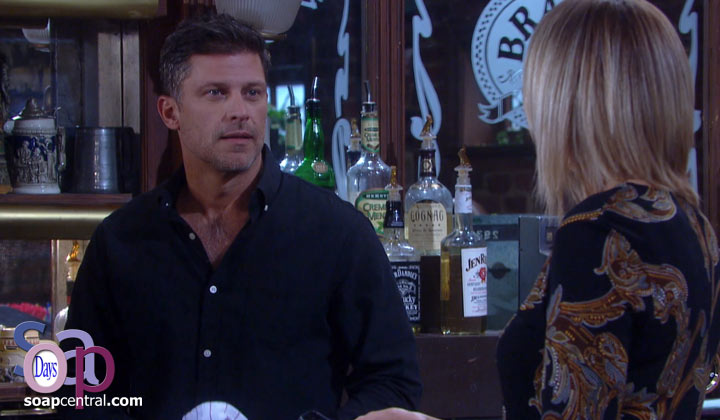 What can viewers expect now that Days of our Lives' Greg Vaughan is back on the canvas as Eric Brady? The actor previews an "eruption" of drama ahead.

Days of our Lives fans have been eagerly awaiting the return of Greg Vaughan as Eric Brady, so it was a special episode last Friday when the holy man finally returned to Salem. And like most soap returns, the character's homecoming is just the beginning of the fun, with Vaughan teasing that there is a lot of excitement ahead.

First things first, the actor reveals that Eric is still involved with the church, and he will once again be involved in the show's devil possession storyline. "It seems to be part one, two, and three of this rollercoaster of a ride that Salem has been going through," he tells TV Insider. "Satan in Salem has been going through possessing bodies left and right... [and Eric] has been working at the ministry a little bit more. Because of his connections and previous[ly] being a father, a priest, if you will, it seems most fitting that they need the help that they need, so it obviously gets Eric back into Salem and a family affair has steamrolled down the mountain and into this moment."

As for how Eric will handle sharing the same zip code as his ex Nicole (Arianne Zucker), Vaughan says it's definitely going to be tricky.

"There's no way of avoiding anybody in Salem. It's a very intricate group of people," he shares. "But the thing is, he left knowing what he had done. He caused a storm, ruffled some feathers, so I think he's very much aware that he wants to stay a little bit removed, giving her the space that she needs, and sometimes it's the betterment of someone else's happiness before your own."

He concludes, "In, like, all good soap opera dramas, it's going to take some time for the drama to unfold but it will evolve, cross paths, [there will be an] eruption and some good... maybe some bar fights, some cake fights."

Check out Vaughan's full video interview here, and don't forget to let us know what you think in our Comments section at the end of the article.

How do you feel about Eric Brady being back in Salem? What do you hope the writers have planned for the character now that he's back in Salem full-time? We want to hear from you -- and there are many ways you can share your thoughts.