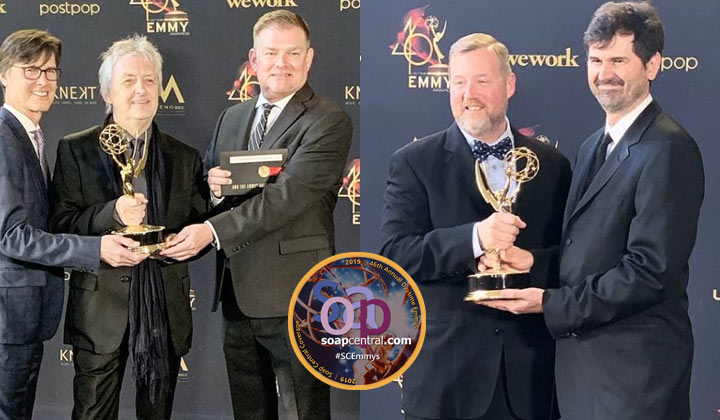 46th Annual Daytime Emmys coverage: It's a feat rarely accomplished, but The Young and the Restless' Writing and Directing Teams were both recipients of Daytime Emmys.

How is that possible? And what did The Young and the Restless submit to go against that trend? The show submitted an episode that not only went against the trend, but also one that isn't often seen in the United States.

"The main [episode] we submitted was the killing of J.T.," Mal Young said in framing how the story went from idea to viewers' TV sets. "I presented [the idea of killing J.T.] to the writing team, I remember the phone call that we had with the whole team on and I said, 'I want to do this episode where we just have four women in a room for an hour'"

Young explained that British soaps had a "tradition of doing what we call two-hander episodes, where it's just say two or three or four characters for the whole episode, and I wanted to see if we could do that because I knew we had the actors, particularly those like Gina [Tognoni], Amelia [Heinle] -- phenomenal actors."

"So I presented it to the writing team, because I knew that they could deliver the words. I mean, you don't enter into these 'dangerous' episodes without knowing you've got people who can deliver, and well obviously, it looks like we did, which is nice," Young concluded, noting that he "always believed in the writing team."

A common question from both fans and the press is exactly what it takes to win an Emmy in a non-acting category. Exactly what made Outstanding Lighting or Outstanding Hairstyling. It's also a question that gets asked of Directing Team winners.

For its Directing reel, The Young and the Restless submitted the scene where J.T. was murdered and then material from the aftermath of J.T.'s death -- an episode that was unlike other episode. It was an episode that revolved around four characters talking about why Victoria fell into a dark relationship with J.T.

"It was a great episode to work with, well, it was a series of four episodes... there were four together, and we submitted two together," director Owen Renfroe explained. "There were not a lot of explosions. We've all done that, and those are great, because they become very thematic. But in this particular instance, we got the high stakes... and that helped to bring out more emotions."

Renfroe was asked if he has any specific advice that he gives actors to help them give the performances that he is looking for.

"We have a very brief amount of time in the early morning to rehearse the material with them, and if there's anything significant that's outside of the script, we bring that to them and collaborate with them on what that is," he stated. "And as we're going through the process, we allow them to discover... so that if something pops or if we're struck by inspiration beyond what we've prepared, we have room for that. And luckily on The Young and the Restless, we have producers who [can incorporate] that into the scene even after we've blocked it and gone through rehearsal. That makes a big difference."

There was a time when Y&R dominated the Directing Team category -- winning four times in a row on two separate occasions. The CBS soap has twelve wins in the category, but this is the show's first win since 2002.

Complete Emmy Coverage: From the red carpet arrivals to the backstage interviews.