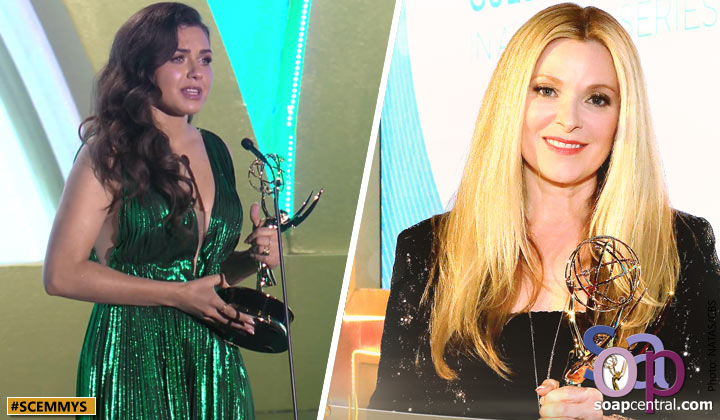 This year’s Outstanding Younger Performer category made history in that it is the first time that a male performer has been included in the nominee list since NATAS merged the Younger Actor and Younger Actress categories into one Younger Performer category last year. General Hospital’s Tajh Bellow joked to Soap Central that he “did something right” to be the first male nominee in the new category, but in the end, the performer with all the right Emmy winning moves was Days of our Lives' Victoria Konefal.

Love. Loss. Sure, that's typical material for any soap character -- but what if you toss in an execution? That's just some of the material featured in Konefal's reel this year. Her reel included the scenes involving Claire’s (Olivia Rose Keegan) betrayal, Ben (Robert Scott Wilson) being executed but brought back to life by Ciara’s love, and a few lighthearted moments between Ciara and Rafe (Galen Gering).

RELATED: Victoria Konefal will return to Days of our Lives this summer

"Artistry has been the love of my life for as long as I can remember," Konefal said as she accepted her award. The actress thanked the cast and crew of Days of our Lives for "making this journey so much fun."

"There comes a moment in your life when you find yourself standing in the middle of your prayer," Konefal concluded. "And for me, this is one of them."

It's a case of lucky number two for Konefal. This is the actress's first Daytime Emmy, but her second nomination. She was previously nominated in the same category in 2019.

Days of our Lives has been the only soap to win in this category since the Young Actor and Actress categories merged into the gender-inclusive Outstanding Younger Performer category. Konefal is only the second female performer to win a "Younger" trophy -- Olivia Rose Keegan was the first when she won last year.

Last year brought many challenges to the daytime industry, one of them being emergency recasts due to the COVID-19 pandemic. All of the affected soap operas handled this obstacle with finesse, and two of the five nominees in the Guest Performer category (Briana Lane and Cady McClain) are perfect examples of casting departments that nailed it. But it wasn't just COVID casting that clicked in 2020. Daytime fans were super thrilled to see primetime stars Kim Delaney (Jenny Gardner, All My Children), George DelHoyo (Orpheus, General Hospital), and Victoria Platt (Corinne La Martine, AMC; Victoria Brandon, Guiding Light) return to the genre, returns that might have at least in part been due to primetime projects being shut down.

When the envelope was opened, Cady McClain picked up her third Daytime Emmy. In doing so, McClain made Daytime Emmy history: she is the first female performer to win Emmys for three different daytime roles.

McClain assumed the role of Jennifer from actress Melissa Reeves, who was unavailable to play the role when DAYS resumed filming after a production break due to the COVID-19 pandemic. McClain jumped in with very little notice and preparation, something she commented on in her acceptance speech.

"Thank you so much to the producers of Days of our Lives for inviting me to play this iconic character for this wonderful storyline written by Ron Carlivati. Thank you to Matt Ashford for breaking down 20 years of characters in less than two hours for me," McClain said from the stage.

McClain previously won Emmys in 1990 as Outstanding Juvenile Female for her work as Dixie Cooney on All My Children, and in 2004 as Outstanding Supporting Actress for her role of Rosanna Cabot on As the World Turns.

And just to make McClain's history even sweeter: she has won an Emmy for soaps on all three networks ABC (AMC), CBS (ATWT), and NBC (DAYS).

ALL MY CHILDREN
All My Children's Josh Duhamel, former Miss World America Audra Mari are engaged

THE BOLD AND THE BEAUTIFUL
B&B stars remember Betty White

THE BOLD AND THE BEAUTIFUL
B&B TWO SCOOPS: Read the latest EMMYS commentary

THE BOLD AND THE BEAUTIFUL
B&B's Thorsten Kaye and Lawrence Saint-Victor visit The Talk, chat about new co-star

DAYS OF OUR LIVES
Linsey Godfrey returning to daytime -- but will it involve The Bold and the Beautiful?

THE BOLD AND THE BEAUTIFUL
IN MEMORIAM: Betty White, the legendary comic, actress, and humanitarian, has died at age 99

THE BOLD AND THE BEAUTIFUL
WATCH: Krista Allen dishes on playing B&B's Taylor
DAYS OF OUR LIVES

DAYS OF OUR LIVES
DAYS DAILY RECAPS: Get caught up on what happened Wednesday on Days of our Lives

GENERAL HOSPITAL
What are some of the most memorable Luke Spencer moments?

GENERAL HOSPITAL
GH DAILY RECAPS: Get caught up on what happened Wednesday on General Hospital

THE YOUNG AND THE RESTLESS
Y&R's Richard Burgi teases Victor vs. Ashland will be epic clash of the titans

THE YOUNG AND THE RESTLESS
Y&R TWO SCOOPS: Read the latest EMMYS commentary

THE YOUNG AND THE RESTLESS
Y&R's Camryn Grimes, Brock Powell are "in a club now" -- they're engaged