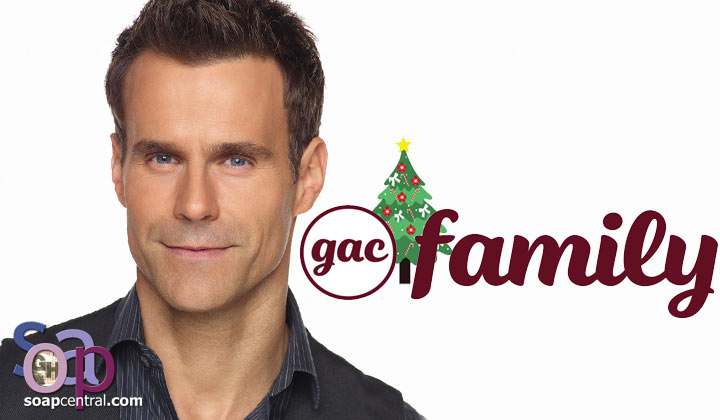 The holidays are coming early for Cameron Mathison (Drew Cain, General Hospital), who began production on The Christmas Farm with Hallmark favorite Jill Wagner this week.

Summer is on the way, but so is Christmas -- at least for General Hospital star Cameron Mathison (Drew Cain)! The actor began shooting a GAC Family holiday film this week, titled The Christmas Farm.

The heartwarming project stars Teen Wolf and Hallmark star Jill Wagner as Janie, a New York City-based marketing executive who returns to her hometown of Woodland Falls when her great-uncle Randall passes away. When she arrives, she's surprised to learn that Randall left her the family homestead, which is also her childhood home.

While not immediately sure what to do with her unexpected inheritance, Janie agrees to honor Randall's final request to plan and host Woodland Falls's annual Winter Wonderland. But when she begins, she's further surprised by the person her late uncle arranged to help her: his farmhand, Dylan (Mathison). With a boyfriend anxiously waiting for her return in Manhattan, Janie begins to feel an unexpected emotional tug about living life in a more authentic, meaningful way.

The Christmas Farm will air as part of GAC Family's second annual "Great American Christmas" event, which kicks off on Friday, October 28. In anticipation of the holiday programming block, the network will be airing encore presentations of 2021's fan-favorite Christmas movies each Saturday throughout May and June.

Mathison is no stranger to holiday films, having starred in Hallmark's A Christmas to Remember and The Christmas Club. His other credits include playing All My Children's Ryan Lavery from 1998 to 2011, and co-hosting Hallmark's daytime talk show Home & Family from 2018 to 2021.

What do you think about the premise and casting of GAC Family's The Christmas Farm? We want to hear from you -- and there are many ways you can share your thoughts.