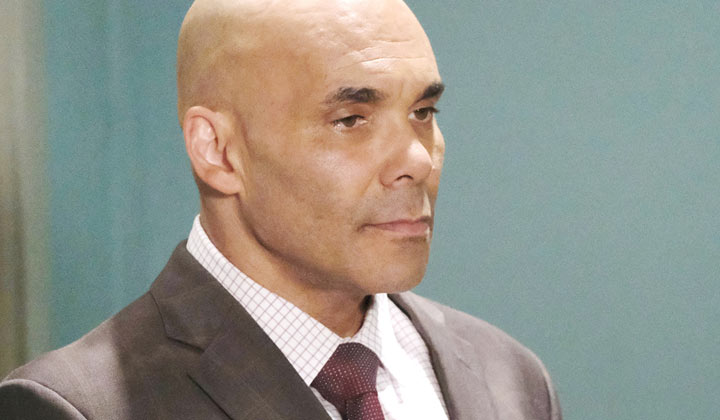 Marcus Taggert grew up in Brooklyn, New York where he got into trouble until police officer, Deke Woods took Marcus under his wing and became his mentor. With Deke's guidance, Marcus turned his life around and became a police officer. Marcus was devastated when Deke was shot down in an alley, so he vowed to make sure the person responsible for the murder faced justice. Marcus was certain that Deke's troubled stepson, Sonny Corinthos, had pulled the trigger. Like Marcus, Sonny had been a troubled kid, but instead of following the path that Marcus had, Sonny joined the mob.

Eventually, Marcus moved to Port Charles and got a job on the PCPD to keep close tabs on Sonny. Marcus was determined to take Sonny down, and he took every opportunity to remind Sonny that Sonny could not escape the past. His vendetta didn't go unnoticed by his superiors, and Marcus landed in hot water on several occasions. Marcus had also befriended Sonny's first wife, Lily Rivera who had died tragically in a car explosion. Marcus blamed Sonny because Lily had been caught in a mob war between Sonny and Lily's father. It was because of Lily that Marcus became the legal ward of her son Juan Santiago.

Marcus was also romantically involved with Sonny's ex-lover, Hannah Scott. Hannah was an FBI agent who had been working undercover to take Sonny down until she had developed feelings for Sonny. Unfortunately, Hannah's boss had been a criminal himself and he had kidnapped Hannah. Marcus and Sonny teamed up with Hannah's father, Roy Deluca to rescue her. Once Hannah was safe, she decided to make a fresh start by taking an assignment far away from Port Charles.

In the summer of 2000, Marcus' sister Gia turned up in Port Charles. She had been attending Columbia University until she had decided that she wasn't interested in becoming an attorney. She dropped out without her mother's knowledge and took a job as a nanny to a couple who lived in Port Charles. When Marcus found Gia, he reached out to their mother, prompting Florence Campbell to join her children in Port Charles. Both Marcus and Florence rented apartments in the Brownstone owned by nurse Bobbie Spencer. Marcus lived in the basement apartment. where Felicia Jones used to live with her daughters.

Marcus continued to focus his energy on taking Sonny down, which often pitted Marcus against Sonny's enforcer Jason Morgan. Marcus took delight in taunting Jason, often referring to Jason as "Anger boy." Despite Marcus' efforts, Sonny and Jason always managed to evade convictions and jailtime. Sonny accused Marcus of being blinded to the truth about Deke because Deke had been a violent man who had tortured Sonny and abused Sonny's mother until she had landed in the hospital and succumbed to her injuries. Marcus believed that it was a lie that Sonny had concocted to justify murdering Deke.

In time, Marcus began to date assistant district attorney Dara Jensen. The relationship always had issues because Dara's ex, Justus Ward remained in the picture. However, it was Dara's dedication to her career and the long hours that proved too much for the couple to overcome.

Professionally, Marcus clashed with the District Attorney because he objected to the illegal methods that Scott Baldwin employed in his efforts to take down Sonny. Like Marcus, Scott had personal reasons to want Sonny sent to jail. Sonny had gotten Scott's daughter hooked on drugs, which had ultimately led to Karen Wexler's death. Marcus was determined to make certain that the charges against Sonny would stick by making sure that everything had been done by the book.

In the summer of 2003, Marcus had left town to pursue other opportunities. Eventually, his mother and sister also moved away. However, on January 10, 2020, police commissioner Jordan Ashford reached out to Marcus for help. A mutual friend and colleague of theirs had died of an overdose, but Jordan suspected foul play. A few days later, Marcus returned to Port Charles, but his first stop was at Turning Woods to visit Mike Corbin. Mike was Sonny's father, and he'd been battling Alzheimer's disease. Sonny was furious when he arrived for a visit with his father and found Marcus talking to Mike.

After a tense exchange with Sonny, Marcus left then made his way to the police station to talk to Jordan about DEA agent Bob Massicotte's death. Marcus agreed that Bob was not the type to get involved in drugs. During their reunion, Jordan asked about Marcus' wife, but he only revealed that the marriage had gone "south" long ago.

About The Actor: Learn more about Réal Andrews.

ONE LIFE TO LIVE
Kassie DePaiva talks Killian and the Comeback Kids, Days of our Lives, Todd and Blair, and more
August 3, 2022
GENERAL HOSPITAL