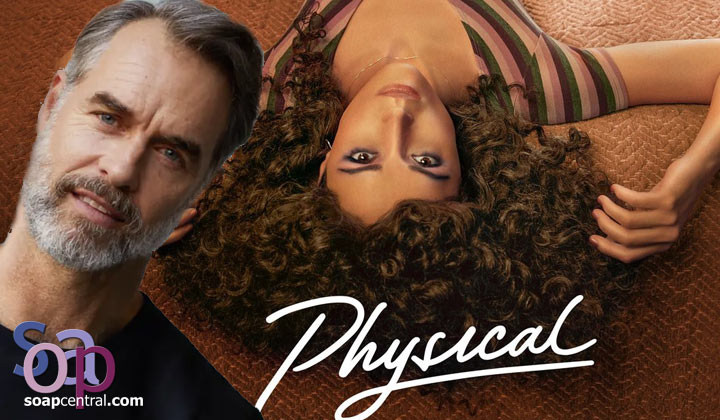 The second season of Apple TV's Physical will see Murray Bartlett (ex-Cyrus Foley, Guiding Light) step into the leg warmers of Vinnie Green, a fitness instructor who's both friends and enemies with Rose Byrne's Sheila.

Former Guiding Light star Murray Bartlett (ex-Cyrus Foley) is on a roll in 2022. Hot on the heels of the news that he has boarded the Hulu Chippendales series Immigrant comes the announcement that he has signed on to season two of the Apple TV+ series Physical.

The blast-from-the-past project stars Rose Byrne as Sheila, a 1980s San Diego housewife who begins to find herself after being introduced to aerobics. The upcoming second season of the popular show will see Bartlett in the role of Vincent "Vinnie" Green, a charismatic fitness instructor, weight loss guru, and late-night infomercial pioneer who is both friends and rivals with Sheila.

"The writing in this season is really fantastic. That stuff that I get to do is really fun, but it's twisted and smart," Bartlett reveals on the Just for Variety podcast. "It's interesting because it's got that whole like '80s fun thing, but there's a depth to this show that's really moving."

Though he's known for series like Tales in the City, Looking, and The White Lotus, Bartlett actually began his acting career on the Australian soap operas Home and Away and Neighbours. Upon relocating to the US, he landed the role of All My Children's Julian Sinclair, which he played from 2002 to 2003, and Guiding Light con man Cyrus Foley, which he played from 2007 to 2009.

What do you think about Murray Bartlett joining Physical? What are your thoughts on the description of Vinnie Green? We want to hear from you -- and there are many ways you can share your thoughts.

THE YOUNG AND THE RESTLESS
Jordi Vilasuso proud to close his Y&R chapter with an Emmy nomination
May 9, 2022

THE YOUNG AND THE RESTLESS
Y&R's Jordi Vilasuso wraps his time as Rey Rosales
March 30, 2022
TRENDING ON SOAP CENTRAL

THE BOLD AND THE BEAUTIFUL
TWO SCOOPS: Dishing the good, the bad, and everything elseB&B

THE BOLD AND THE BEAUTIFUL
B&B releases digital album of 35 of its most memorable scores
June 2, 2022
DAYS OF OUR LIVES

DAYS OF OUR LIVES
TWO SCOOPS: Dishing the good, the bad, and everything elseDAYS

SOAP CENTRAL
Which soap has the best sets? Find out during the Set Decorators Society of America Awards
June 16, 2022
GENERAL HOSPITAL

THE YOUNG AND THE RESTLESS
TWO SCOOPS: Dishing the good, the bad, and everything elseY&R

SOAP CENTRAL
Which soap has the best sets? Find out during the Set Decorators Society of America Awards
June 16, 2022
© 1995-2022 Soap Central, LLC. Home | Contact Us | Advertising Information | Privacy Policy | Terms of Use | Top
SECTIONS
Soap Central
Daily Recaps
The Scoop/Previews
Two Scoops Commentary
Message Boards
Daily Recaps
Cast and Credits
Who's Who Character Profiles
Daytime Emmys
SHOWS
All My Children
Another World
As the World Turns
The Bold and the Beautiful
Days of our Lives
General Hospital
Guiding Light
One Life to Live
Passions
Port Charles
Sunset Beach
The Young and the Restless
ABOUT
About Soap Central
Contact Us
Feedback
FOLLOW US
Facebook
Twitter
YouTube
Instagram
Pinterest