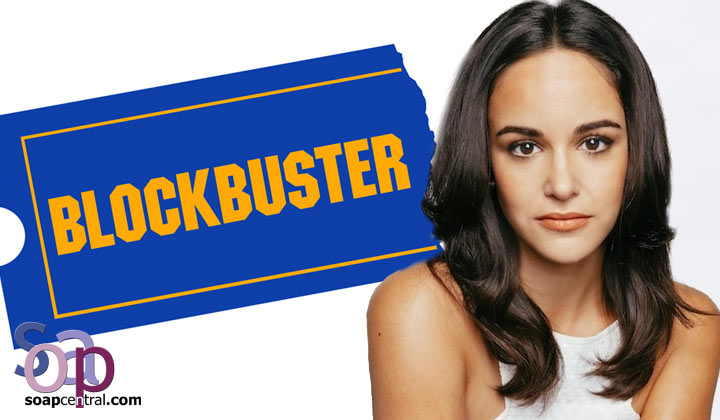 One Life to Live alum Melissa Fumero (ex-Adriana Cramer) has been hard at work following the cancellation of her comedy series, Brooklyn Nine-Nine. First, she nabbed a role in the comedy Bar Fight, and now comes news that she has landed a leading role in a new Netflix series called Blockbuster.

The single-camera workplace comedy centers around the last remaining location of the video rental chain that was famous throughout the 90s and early 2000s. Fumero will star alongside Randall Park as Eliza, a dedicated mother whose marriage to her high school sweetheart is currently on the rocks.

After having left Harvard after one semester to start a family, Eliza now works at Blockbuster alongside Park's Timmy as his trusted number two. But could there be more between them?

According to TV Insider, Netflix has ordered ten episodes of Blockbuster, which was created by Vanessa Ramos, David Caspe, and Jackie Clarke. The trio will also executive produce the series, along with John Davis and John Fox.

Melissa Fumero starred as OLTL's Adriana from 2004 to 2008 and returned for a brief arc in 2010 that featured the return of Gina Tognoni in the role of Kelly Cramer. After leaving the ABC soap opera, Fumero went on to do a short arc on Gossip Girl before landing the lead role of Amy Santiago in Brooklyn Nine-Nine. Some of her other credits include Marvel's M.O.D.O.K., Elena of Avalor, and One Day at a Time.

What do you think about the casting and premise of Blockbuster? We want to hear from you -- and there are many ways you can share your thoughts.

ONE LIFE TO LIVE
OLTL's Eddie Alderson proposes to "the love of his life"
May 5, 2022

ONE LIFE TO LIVE
OLTL's Florencia Lozano breaks hearts in drug-use film Life After You
May 2, 2022
TRENDING ON SOAP CENTRAL

ALL MY CHILDREN
Shop 'til you drop -- Chrishell Stause has a new clothing collection!
April 15, 2022

ALL MY CHILDREN
AMC's Walt Willey asks fans to "light a candle" before he undergoes surgery
April 12, 2022

ALL MY CHILDREN
Find out when you can buy AMC star Kelly Ripa's memoir, Live Wire
April 11, 2022

ALL MY CHILDREN
Kelly Ripa signs on as host of new Jimmy Kimmel game show
April 8, 2022

ALL MY CHILDREN
Congratulations to AMC's Jonathan Bennett, who has two big life moments to celebrate
April 7, 2022
ONE LIFE TO LIVE

THE BOLD AND THE BEAUTIFUL
Three soap hunks to star in tense cop drama from Youthful Daze creator
September 9, 2021

THE BOLD AND THE BEAUTIFUL
Ted King opens up about his new B&B role
July 14, 2021