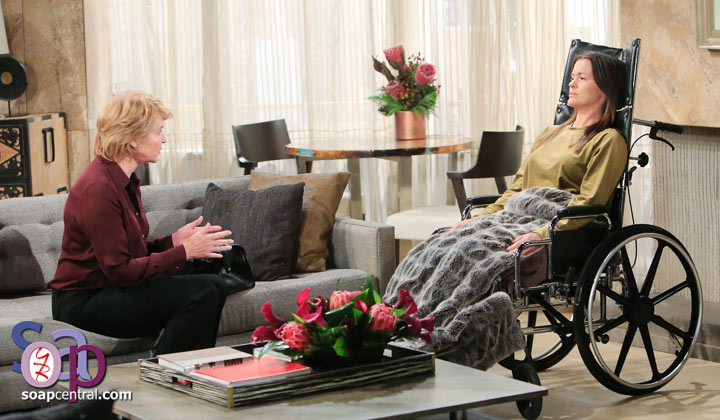 Actress Dana Sparks was incredibly nervous about taking on her new role as The Young and the Restless' Dr. Cavett, but the Passions alum reports that the experience has been an utter delight.

Daytime alum Dana Sparks has only had a handful of acting credits following her 1999-2007 run as Passions' Grace Bennett and Faith Standish, but recently re-connecting with an agent she knew back in the day has changed her fortune. In a new interview with Soap Opera Digest, the California native reveals that she decided to sign with said agent again -- and The Young and the Restless' Dr. Lena Cavett was the first role he sent her out for: "And here we are!" she enthuses.

Though, admittedly, landing the role of the stroke specialist wasn't exactly as easy as that. Sparks says that not being able to audition in person due to COVID-19 restrictions was a big challenge.

"Since the character is a doctor, there was medical speech to learn, but my mindset was, 'I really want this one,' so I really committed to it," she recalls. "Auditioning is already a different skill from acting, especially with auditioning by tape. You have to light yourself, do your own hair and makeup, and choose your own wardrobe. Also, you're not getting any immediate feedback from the casting director and I have to say that I do miss that because when you read for something, they'll tell you if it's not what they're looking for and give you something else to try. It's nice to have that back and forth in the room, but obviously, you can't do that now, so the trick for me was to lay nice colors out and give a full palette."

Fortunately, the casting department at Y&R appreciated Sparks's take on the audition sides, and she's now working alongside some of the soap's biggest stars, including Mark Grossman (Adam Newman) and Melissa Claire Egan (Chelsea Lawson). The latter is unable to speak or move due to Chelsea having had a stroke, but Sparks says Egan has been a dream acting partner despite.

"Initially, I was nervous about [my scenes with her], to be honest, because I was the only one who had these speeches," Sparks explains. "After the first day, I told Missy that she helped me so much because I felt like we really connected. She shows so much emotion with even her eyes and that made me want to be really clear when we were communicating. The set goes away and the cameras go away because you're focused on this one person who is relating back wonderfully. I have to say that the first day was really delightful."

For more from Sparks on her experience working at Y&R, check out Soap Opera Digest's full interview with the actress here.

Though best known for starring on Passions, Sparks has a long list of primetime credits to her name, including Cover Up, Falcon Crest, L.A. Law, Melrose Place, Star Trek: The Next Generation, and JAG.

How do you feel about Dana Sparks playing the role of Y&R's Dr. Cavett? Do you think there's potential to have the character stick around in Genoa City long-term? We want to hear from you -- and there are many ways you can share your thoughts.

THE BOLD AND THE BEAUTIFUL
B&B SPOILER ALERT! Steffy and Finn share a cosmic connection

DAYS OF OUR LIVES
DAYS COMMENTARY: Every day is a winding road

GENERAL HOSPITAL
GH COMMENTARY: The smile has left your eyes

THE YOUNG AND THE RESTLESS
Eileen Davidson marks 40 years at The Young and the Restless with lookback video; soap also set to air Abbott sister special
June 13, 2022
© 1995-2022 Soap Central, LLC. Home | Contact Us | Advertising Information | Privacy Policy | Terms of Use | Top
SECTIONS
Soap Central
Daily Recaps
The Scoop/Previews
Two Scoops Commentary
Message Boards
Daily Recaps
Cast and Credits
Who's Who Character Profiles
Daytime Emmys
SHOWS
All My Children
Another World
As the World Turns
The Bold and the Beautiful
Days of our Lives
General Hospital
Guiding Light
One Life to Live
Passions
Port Charles
Sunset Beach
The Young and the Restless
ABOUT
About Soap Central
Contact Us
Feedback
FOLLOW US
Facebook
Twitter
YouTube
Instagram
Pinterest