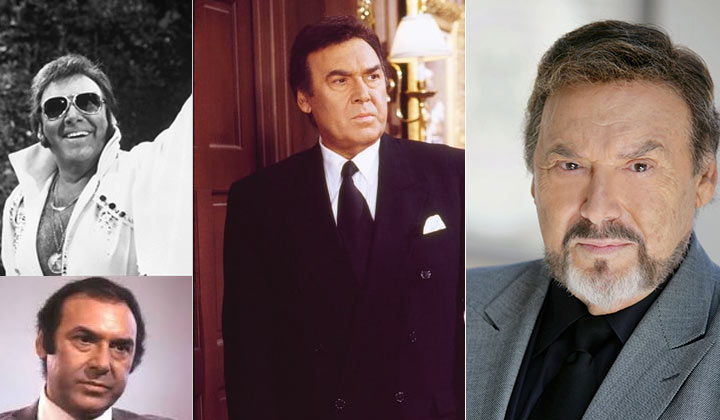 What happened minus the opinion
Daily Recaps

Chad went to see Stefano with a knife and tried to get a DNA sample. A lock of hair or a cheek swab would do the same thing, but the fact that he's out for blood is funny in a DiMera-like way.

There's a lot you can do with five rings. You can have an Olympics. You can go out with Magic Johnson and not be over-dressed. And, you too could be Mrs. Sami Reed Walker Roberts DiMera Hernandez! Yes, sweeps ended with a classically soapy wedding. Now, we can look forward to the winter in Salem and start taking bets on the 2010 "Christmas Miracle."

SAMI and RAFE
I had mixed feelings about the Safe wedding. On one hand, it's always nice when the writers finally give a fan base what they want. Sami and Rafe had been talking on-and-off about marriage since last Christmas and I'm sure Safe fans were growing anxious. I don't see these two splitting up any time soon because Sami is completely dependent on Rafe, and he is committed to being her hero.

On the other hand, I got a headache from rolling my eyes at the Safe wedding. The thing ended with a shooting star. Really? I'm surprised that the Pope didn't decide to show up with his good friend, Queen Elizabeth, as his guest to give Sami and Rafe some of the magic fairy dust that makes Santa's sleigh fly as a wedding present. I've never been a Safe fan, so yes, I'm totally biased.

Bottom line, even though I didn't personally enjoy it, I appreciated it for the cheese-covered soapy ball of goodness that makes soaps great. And I loved how the producers spliced the scenes of E.J. finding out about the wedding in between the wedding vows. The storyline transition was brilliant and now we'll see what happens next.

My suggestion would be to let Gabi follow her gut instinct that Arianna did have proof for E.J., and he's got his hands on it now. No offense to the adults, but I could use a break from Sami, Rafe, and E.J. Let the kids drive this one for a while.

Will knows the truth. Gabi doesn't believe for a second that this wedding was all about Sami and Rafe celebrating their love. And, she may soon have a friend inside Camp DiMera.

CHAD
Chad went to see Stefano with a knife and tried to get a DNA sample. We all know that a lock of hair or a cheek swab would do the same thing, but the fact that he's out for blood is funny in a DiMera-like way.

I hope the test doesn't take long. Let's go ahead and confirm this puppy so we can get Chad acclimated into the DiMera family. Will he be good like Lexie? Will he be bad like E.J.? Will he go after Nicole for using his daughter as a pawn in her scheme? Yes, Chad's been on the show for a while, and I've paid attention to the foundation that the writers have established.

MELANIE and NATHAN
Even though their scenes make me want to grab the big fluffy blanket that I only use when I'm sick, I like this storyline. What can I say? I have a soft spot for Melanie and Nathan.

But, the writers need to move it along ASAP. We know that Melanie married Philip before she was ready. We know that Nathan proposed to Stephanie because she's the best consolation prize since the George Forman Grill. We know. Yes, we know.

If the writers expect viewers to wait for Chloe's affair, Parker's paternity, and Stephanie/Caroline's DNA switch to come out before Mel and Nate can make another go of it, I'll be ticked. I have a better chance of getting all of my holiday shopping done early than there is of all three of those storylines wrapping up in a timely manner. Still, this storyline has promise.

Personally, I can't wait for Stephanie and Philip to pace outside the quarantine room, both wringing their hands with guilt. In my humble opinion, Jay Johnson and Shelley Hennig are fabulous together, so I'll take them any way the writers will give them to me.

HOPE
It was only a matter of time before Hope got thrown into solitary confinement. That warden is as shady as a cable company promotion. So now Hope is going to have to investigate the prison from the inside of a locked cell. I say bring it. But, Hope's going to need some help.

I want Sami to go to jail with Hope more than ever now. Seeing the Safe wedding scenes in between Hope's jail scenes make me realize how much these two mothers could help each other.

Hope went the martyr route and agreed to go to jail so that her daughter wouldn't have to testify at a trial. Sami went the selfish route and got married in an attempt to have one less possible witness against her. Both thought that they were doing what's best for their children, but both were wrong.

If these two characters could help each other figure out their faults AND expose a huge scandal in the Statesville prison system, I'd be thrilled. If that also happens to mean that the divine Kristian Alfonso and the superb Alison Sweeney had to share a lot of scenes together - well -- I guess I'd suffer through it.

MAGGIE, VIVIAN, and VICTOR
Thank God my Maggie is out of that sarcophagus. That dreaded pink pillow clashed with her gorgeous red hair. It's good that it didn't take Victor a stupid-long amount of time to figure out that Vivian got to Maggie. Brains, looks, money, and a great mini-bar? This man should be the most eligible bachelor in Salem!

Too bad Maggie is still too affected by those toxic fumes to realize that. When she comes down, I'm sure she'll regret admonishing Victor for stepping in and making Vivian pay. Seriously, I appreciate Maggie's good will, but Maggie's not an idiot. Vivian got what was coming to her. Maggie was silly to blame Victor.

Besides, Vivian's already getting away with the crime because Brady can't turn her in without incriminating half of Salem. I would have liked to see Brady call her bluff because I don't think Vivian would have let Philip go down with them all. But, this means that Brady is going to deal with Vivian in his own way. And, evil Brady entertains me to no end.

If the writers were trying to chemistry test the two again, allow me to save them the time. James Scott and Arianne Zucker have wonderful chemistry together. But if Nicole and E.J. become a couple again, I want both of them to be bad. AND I want them to work together on things. If the writers have to dumb-down E.J. and/or weaken Nicole for this pair to work, then this experiment should stop immediately. I'll get cranky if I see a repeat of summer '09.

LOOSE ENDS
Ben and Jen ran into each other again (okay, I need to stop rhyming) and apologized for their earlier awkward encounters. Perhaps there would be less chance of mood-altering interruptions if they met in some place other than a hospital. Just a suggestion.

I have to say that if my life depended on two doctors developing a cure for an incurable virus, I would want those two doctors to be Carly and Daniel. Carly fished a dying man out of the river and nursed him back to health with a simple sailor's first aid kit. And Daniel, well, do I really need to list the amount of miracles he's performed? Didn't think so.

I giggled with delight when Nicole lifted Sydney from Sami's arms and whispered, "I gave you a chance, Sami." SO SOAPY! The rivalry between these two ladies is about a zillion times more interesting (not to mention better balanced) than Rafe vs. E.J. Let's not forget that in addition to stealing Sami's baby, Nicole has also slept with Sami's father, brother, and step-brother. And for her part, Sami married Nicole's brother. Yes, these two have a genuine rivalry that's always been fun to watch.

HOT
Melanie blowing Carly a kiss was wonderful. Sure, it's totally corny, and I half expected Carly to mouth, "Olive juice" in response. But Melanie has been leading the Carly Hate Parade for way too long. I don't like angry Melanie or sad Carly. So, the sooner the show gets these two lovely ladies playing nice again, the happier this scooper will be. Also, it's probably best not to spew hate at the woman who's trying to save your life. Take note, kids.

NOT
Poor Roman and Bo. They just can't catch a break. Between Caroline, Sami, Victor, and Brady, neither of the brothers in blue can close any case because they'd have to put a family member in jail. At least when Abe was in charge, it was a given that the DiMeras would be the main suspects at all times. Maybe Boman can get careers in security. I heard Victor is in the need of some new guards outside of the mausoleum.


LINE OF THE WEEK:
Roman (about Sami): "She could have at least send me an email, 'FYI, Dad, I got married tonight.'"

RANDOM THOUGHTS:
The sight of Vivian in her cucumber mask cracked me up.

Too bad Sami can't marry Rafe, Will, AND the camera. Then nothing could be used as evidence against her!

I love that that same gold rim that's around all the stemware in Salem in also around the ice bucket in the DiMera mansion.

I adore that Doug bribed the guard so that he could hug Hope.

It makes me smile to see how genuinely amused Chandler Massey is with Aaron and Griffin Kunitz (the twins playing Johnny). Those little boys love showing off!

That's all for this week. Tony will be back next week to get Salem all decorated and ready for the holidays. Until then, does anyone think Mary and Kate hang out poolside at the mansion? Will Sami call Lucas and tell him what's happening to his children? Will Pam share a hospital room with Maggie? Will it come out that Detective Hanson is Max Brady's long-lost brother? Will Victor ever offer me his yacht in the Greek isles? I promise to keep quiet about anything that he wants!

What are your thoughts on Days of our Lives? What did you think of this week's Two Scoops? We want to hear from you -- and there are many ways you can share your thoughts.

Facebook
Two Scoops is an opinion column. The views expressed are not designed to be indicative of the opinions of Soap Central or its advertisers. The Two Scoops section allows our Scoop staff to discuss what might happen and what has happened, and to share their opinions on all of it. They stand by their opinions and do not expect others to share the same point of view.
More scoops, spoilers, and commentary
The Scoop: This week's previews