Give me the beat boys, and free my soul 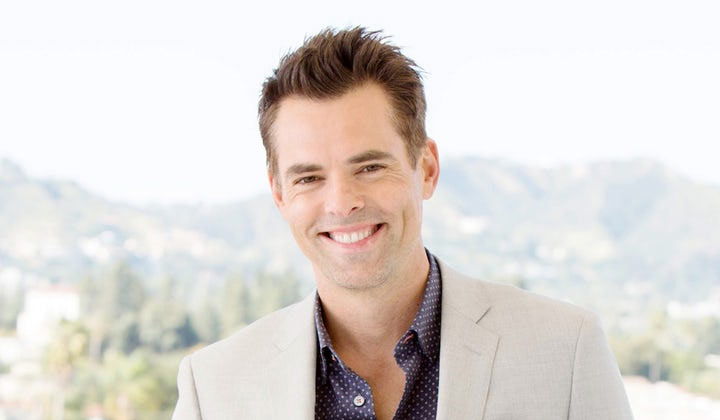 What happened minus the opinion
Daily Recaps

I hope I am not giving away any big secret here, but yeah, Spinelli (aka Bradford Anderson) can sing. So my bet is that with or without the magical pitch correction microphone Spinelli will belt out a lovely tune for Maxie next week.

Robin and Patrick gave the Dirty Dancing routine a good try, but I promise you that their version of "I Had the Time of my Life" is not going to be flying up the iTunes charts anytime soon. But really, all this karaoke nonsense, who cares? In my opinion it's just another example of lazy writing.

I can hear the discussion around the writer's table now..."Man, it sure is a pretty day, wish I could surf." "Dude! We can totally go to the beach! Let's just write a scene where we set up a karaoke machine in Coleman's bar and let all the actors who can sing go to Karaoke night! That could fill up one, maybe two whole episodes! We can be out of here in 20 minutes!"

There is really no other excuse I can think of for the amount of time devoted this week to Karaoke. We had people talking about karaoke, inviting other characters to go to karaoke, practicing their karaoke numbers in the shower, giving instructions to warring parties not to fight at karaoke, Coleman walking around the bar trying to convince people to sing karaoke, and we only got one lousy song out of it.

When my friends and I go to karaoke night no one ever turns down the mike and refuses to sing. My friends would trip someone on their way to the stage to get that mike in their hand. That would have been much more fun to watch.

The happiest thing I heard about GH all week was here on Soap Central when Dan posted the news that the GH writing team has some fresh blood. Anyone with a new idea is welcome. And the incoming writer has a good reputation, so I can only hope he brings his genius and cleans up the mess that is Port Charles.

As I sat down to write this column I tried to think about the highlights I wanted to hit, and really there weren't any. Let's take it down to basics... Think back about what actually happened on GH last week:


Which of these storylines would inspire a viewer to stay tuned in? None of them, in my humble opinion. Many viewers keep watching soaps when the writing is lazy out of habit. We hold on through dull periods hoping that things get better, and many times they do.

Shows get into slumps occasionally, and we ride it out and are rewarded for our patience with something like the big train wreck, or the Metro Court Hostage crisis. But it's been a really, really long time since we have had a storyline that wowed us.

The murder mystery is half way interesting, but not riveting. It only involves one character that we care about; Alexis. Alexis is being framed, we know she is innocent and we care about her. That part of the story is solid.

But in many soap murder mystery plots, the suspense comes because we care about all the players and there is usually more than one suspect, so we get caught up in the "Whodunit?" mentality.

Not so in this story.

Mayor Floyd has been on canvas sporadically, and never as a main character. Martha Byrne's 'Andrea Floyd' is a newcomer. She's a stranger. Thus, we aren't rooting for her or hating her, because we don't know her. The dead mistress Brianna Hughes is not of any interest to us either because we never saw her other than that she was the limp body being dragged out of a hotel room.

Maybe there are some twists and turns to look forward to here. Maybe I am just being impatient. But since Andrea is trying to frame Alexis for the murder and sneaking into her house forging e-mails and such, it seems somewhat clear that she is the real killer.

And her job to cover up her crime has been made easier due to Jr. Detectives/Doctors Robin and Patrick who keep yapping about what they know out loud in open hospital corridors where Andrea can hear them and then rush to cover up that exact evidence.

The other secret that is out to us as viewers, but not to the town of Port Charles is that Ethan and Rebecca are in cahoots. When and how that secret will be revealed is a mystery. Maybe on Nik and Rebecca's wedding day? Maybe Rebecca will get knocked up and Carly will overhear Rebecca and Ethan at her OB/GYN appointment talking about how Ethan might be the daddy.

Of course then we would have three pregnant women who aren't showing. The other day when Carly was on the bed and Jax was talking about the baby, it looked perhaps as if the prop guy said "Hey, does anyone have a lime? We need to give Carly some sort of baby bump; I think a small citrus fruit will suffice."

I am happy to have more visibility of the Quartermaines now that Michael has moved in, but it's another time when I am sad Stuart Damon is gone. I can imagine the scenes between Michael and Alan in my head even though they will never happen.

And if the writers' choose to bring A.J. back from the dead, I will play along, promise. I miss A.J., so I will pretend I buy any stupid storyline they come up with where he is still alive. Maybe he can be kidnapped with Emily and Courtney and Stefan by Helena. I always like to pretend Helena has all the presumed dead people in some dungeon and they will be freed someday.

What will happen tomorrow dear readers? Will Spinelli's beer soaked mike still do the trick at karaoke? Will Rebecca and Nik sing "I Got You Babe"? Will someone make Maxie take the Swiss Miss braids out of her hair? Will Jason spring Anthony from prison if Anthony vows to get rid of his whacko daughter Claudia? Will Lucky and Ethan find out that they both love Captain Crunch for breakfast? Will Sonny bribe an insurance agent to cover Michael's driving to one up Jax for bribing someone to get Michael an illegal driver's license? Will Claudia and Carly shop for maternity clothes even though their baby's are obviously malnourished pea-sized beings?

Facebook
Two Scoops is an opinion column. The views expressed are not designed to be indicative of the opinions of Soap Central or its advertisers. The Two Scoops section allows our Scoop staff to discuss what might happen and what has happened, and to share their opinions on all of it. They stand by their opinions and do not expect others to share the same point of view.
Related Information

B&B Two Scoops: This week's commentary for The Bold and the Beautiful.

DAYS Two Scoops: This week's commentary for Days of our Lives.

Y&R Two Scoops: This week's commentary for The Young and the Restless.

More 2022 Columns: More of this year's great GH commentary from our columnists.

Even More Opinions: An archive of every GH Two Scoops column ever written.