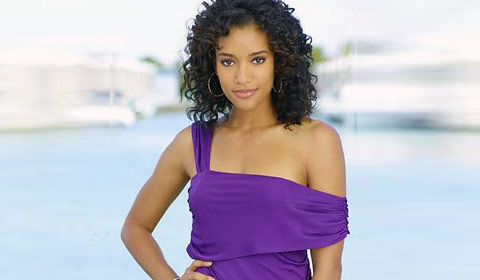 Injured in an automobile accident [Apr 2010]

Dr. Maya Ward arrived in Port Charles, from Philadelphia, Pennsylvania, at the urging of her great-grandfather, Edward Quartermaine. Edward agreed to help Maya finance the rest of her medical education if she agreed to move in to the Quartermaine mansion and get to know the Q side of her family. He also agreed to allow Maya's sister, Zoe, to move in as well.

Immediately upon arrival in Port Charles, Maya was involved in a car accident with Ethan Lovett, the stepson of her great-aunt, Tracy Quartermaine.

Maya was welcomed into the fold warmly by Edward, but both Edward and Monica urged her to try to give Tracy her space. Monica even offered to make other living arrangements for Maya if it would make her more comfortable, but Edward insisted that his great-granddaughter live with them at the mansion as he had planned.

Upon first encountering Maya, Tracy offered her a check for $50,000 to leave town, assuming that the only reason Maya contacted the family was to benefit from their wealth. Maya declined Tracy's offer and stood fast with her plan to get comfortable in her new living situation surrounded by a family full of virtual strangers.

Maya reported for her internship at General Hospital on April 5, 2010, and, much to her chagrin, Edward showed up moments later throwing around his weight and asking for preferential treatment for his great-granddaughter. Dr. Webber made it clear to Edward that Maya would be treated like any other intern and that she had made it into the program on her own merits and not because of any family connections. Maya also assured Dr. Webber that she expected no special treatment and once again made it clear to Edward that she did not want him to continually interfere in her work at General Hospital.

In her first few weeks at General Hospital, May a continued to encounter both Ethan and Lucky as they dealt with the aftermath of Kristina Davis' beating and the subsequent death of her abuser, Kiefer Bauer. Kiefer had been killed in a hit and run accident and Lucky was investigating the death. Ethan had a dent in his car, which made him the main suspect. He was cleared when Alexis Davis confessed to the hit and run. The damage to Ethan's car had been caused when he and Maya were involved in a minor car accident.

Ethan flirted with Maya but she initially refused all of his advances. Maya was at the hospital when Ethan was shot by Warren Bauer, Kiefer's father. Warren held a gun on Kristina and blamed her for Kiefer's death. Ethan and Police Commissioner Mac Scorpio were shot when Warren opened fire. Maya froze and was unable to tend to Ethan's gunshot wound. She later apologized to Ethan and shared her boyfriend had died in front of her and she had done nothing. Ethan assured her he was going to be fine and he flirted outrageously with Maya while he recovered in the hospital.

Maya began to enjoy Ethan's flirtatious banter and they worked together to reunite Tracy and Luke. Maya helped Luke and Ethan make the arrangements for Luke to fake a heart attack. When Tracy allowed Luke to move back in to the Quartermaine mansion, they considered their scheme a success. Tracy knew Luke faked his heart attack but she still agreed to marry him in Las Vegas. Ethan and Maya joined Tracy and Luke in Las Vegas to witness their marriage.

Luke, Tracy, Maya, and Ethan consumed a large quantity of alcohol in Las Vegas the night Luke and Tracy were to be married. When Tracy and Luke struggled with their vows Maya and Ethan spoke on their behalf. The next morning, they realized that the justice of the peace had married Maya and Ethan instead of Luke and Tracy. While Luke and Tracy searched for an attorney to annul the marriage, Maya and Ethan hit the casino. Maya won a sizeable amount and she and Ethan celebrated her luck by consummating their marriage.

Initially, Maya was concerned she would not be able to annul the marriage since she had slept with Ethan. Her worries were erased when she and Ethan learned their marriage could still be annulled since neither had been sober during the exchange of vows. Since the marriage could be annulled later, Ethan and Maya decided to enjoy the benefits of marriage a little while longer. They returned to Port Charles as a married couple.

Edward Quartermaine had a surprising reaction to the news of Ethan and Maya's marriage. He offered them one million dollars to remain married for one year. Edward saw promise in Ethan and believed he could potentially be the next generation of ELQ. Ethan jumped at the money but Maya hesitated to accept the deal. Ethan persuaded Maya to accept Edward's offer.

The newlyweds continued to get to know one another and planned to move in together, although Maya had second thoughts. She had grown attached to Edward and was not ready to leave the mansion. Ethan realized her attachment to Edward after she failed to send a check to secure the deposit on an apartment. Ethan agreed to move in to the Quartermaine mansion.

Maya returned to Philadelphia to care for her sick aunt and had very little contact with Ethan while she was gone. Ethan showed up to surprise her, but he ended up surprised instead when he walked in on Maya in bed with a man named Aaron. Maya told Ethan she had fallen in love with Aaron and would not be returning to Port Charles. She explained she cared for Ethan but his risk taking and adventurous spirit were too much for her. Ethan filed for a divorce.