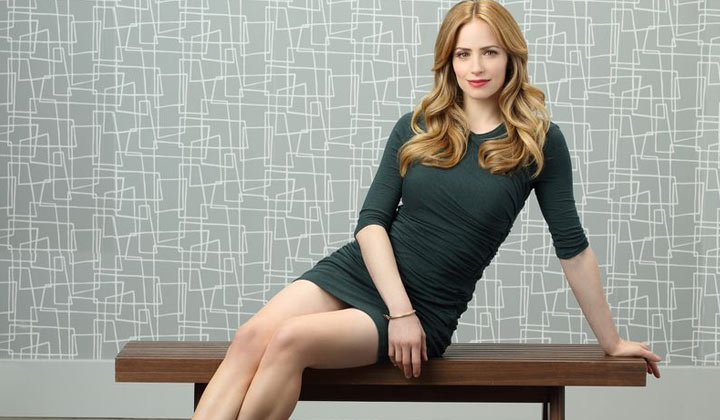 Kristina was the hidden child of Mikkos Cassadine and his mistress, singer Kristin Nilsson (who used the stage name Bergman). While Mikkos' jealous wife, Helena, slit their mother's throat, Alexis hid her baby sister in the barn. When Alexis returned to get her, Kristina was gone. Mikkos had had her taken and she was raised by the Carters to keep her out of Helena's grasp. When Kristina learned of her sister, she hired Angel Ellis to find her. Angel, who was also working at trying to find Brenda for Jasper Jacks, introduced Kristina to Jax. When Jax realized Kristina was Alexis' sister, he brought her to Port Charles so they could be reconciled. Fearing for Kristina's safety should Helena learn of her, Jax hid Kristina in his hotel room. However, once Helena learned that one of her favorite boy toys, Jax, was back in town, her frequent visits to Jax' hotel room put Kristina in further danger. Alexis and Kristina were reunited but Alexis joined in Jax's fear for her safety. They decided to hide her at Ned's gatehouse. Ned was curious about who this mysterious woman was but neither Jax nor Alexis was forthcoming. Eventually, Kristina was introduced to her half-brother Stefan over Jax and Ned's objections. Stefan was believed to have murdered Chloe Morgan at the time. Yet a deeper threat lurked out of sight, Stavros!

Once Helena and Stavros were dealt with, Kristina confronted Helena at the Port Charles jail. Helena was taken back by Kristina's remarkable resemblance to her dead mother. At Nikolas and Gia's engagement party, Stefan acknowledged that Kristina was a Cassadine. Then Kristina announced she was legally changing her name from Carter to Cassadine. In the meantime, Ned tried to lure Kristina into singing on the L&B label. She turned him down but she did agree to assist him. She moved in with her sister, Alexis, and helped to defend and protect her from Sonny Corinthos. At the same time, she found herself dealing with attraction to Ned Ashton, her sister's former fiancé.

However, Alexis made a big mistake that would have huge consequences. Alexis had an affair with Sonny Corinthos and got pregnant. Alexis did not want Sonny to know that she was pregnant with his child. In an attempt to cover up the truth, Ned took responsibility of the unborn child. Kristina was horrified to learn "that Ned cheated on her" with her sister, so she didn't want anything to do with him. Carly tried convincing Alexis to tell Sonny the truth. However, Alexis kicked Carly out when Carly suggested that Alexis had fallen in love with Sonny. Alexis then considered telling Sonny the truth, so she wrote a letter to Sonny which said, "The child is ours, Sonny." However, she changed her mind and threw the letter in the fireplace. After Alexis left, Kristina arrived and found the letter, thus discovering the truth! Kristina was determined to tell Sonny about Alexis's unborn child. In an attempt to find Sonny, Kristina went to Sonny's warehouse when a bomb set by Luis Alcazar detonated. After the explosion, Roy and Felicia found Kristina critically injured. Kristina was rushed to the hospital, where she talked to Alexis and Ned one last time. Kristina decided not to tell anybody about Alexis's secret and she professed her love to Ned before she died.

In memory of Kristina, Alexis named her new baby girl after her.

About The Actor: Learn more about Jaime Ray Newman.

Family Trees: Scan the many branches of the Cassadine family tree.