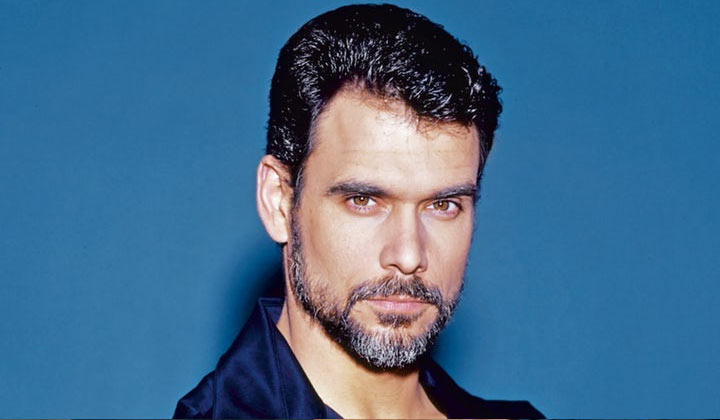 Lucien Cain; alias while out in public

Died after being locked inside a cryogenic chamber on Cassadine Island [Apr 12, 2013]

Formerly a clinic in Switzerland

Formerly in a laboratory many levels below General Hospital

Attempted to kill Lucky Spencer by throwing him into the river bound and gagged [Oct 5, 2001]

Clobbered Dante Falconeri over the head and rendered him unconscious [Mar 21, 2013]

Arranged for Lulu Falconeri to be injected with a tranquilizer and fertility hormones [Sep 15, 2014]

Stavros was the real heir to the Cassadine throne. Being a prince, he was raised as a spoiled brat who got everything he wanted. This eventually led him to kidnapping Laura Spencer, whom he was completely obsessed with. He lied to her and told her that her husband, Luke, was dead. He took her to an island, where he forced him to marry him. He raped her and impregnated her with his son, Nikolas Cassadine.

Stavros' mother, Helena, was very jealous of her precious boy's obsession with Laura. The evil Cassadine mother helped Laura escape from the island. This led Stavros to find her with Luke. After a long fight, Luke and Laura watched as Stavros fell down a flight of stairs after catching his foot on a step, and Helena always swore that Luke killed her son. He broke his neck, and Luke and Laura watched their enemy "die."

Twenty years later, it was revealed that Helena had had Stavros' body cryogenically frozen. She kept him frozen until technology allowed him to be revived. After being thawed out, Stavros quickly began wreaking havoc on Port Charles. Nobody knew he was alive, but he would go to Laura's house and place things and clues there that would remind her of him. He would also secretly tantalize his brother, Stefan.

Stavros met Chloe, who was very close to Stefan. Pretending he was Lucien Cain, a successful businessman, he tried to play Chloe against Stefan. Chloe eventually figured out exactly who Stavros was. Unfortunately for her, though, before she could tell Stefan, Stavros murdered her and set Stefan up to take the rap.

Stavros, or "Lucien," also became involved with his son's ex-girlfriend, Gia. He tried getting close to her to obtain information about his son. Working with Helena, he tried to figure out whether Nikolas was on the Cassadines' side or if he was faking.

Stefan and Laura figured out that Stavros was alive. Stefan escaped from jail, and the two brothers encountered each other at Wyndemere. Surprisingly, Stefan, tied his brother up and left him in a coffin. When the police arrived looking for Stefan, they found Stavros in the coffin and, after questioning, let him go.

When Helena was ready for Stavros to meet Nikolas, she had Stavros pretend he was still frozen. They wanted to see how Nikolas reacted when he saw his father. While Stavros and Nikolas were alone together, Nikolas looked at his "frozen" father and said he hated Stavros and never wanted him to be alive. The words hurt Stavros very deeply.

After Helena lured and trapped Bobbie, Stefan, Alexis, Luke, Laura, Lucky, Gia, and Nikolas inside the underground lab, Stavros decided to prove his love for his son by showing Nikolas the way out of the maze. While Gia and Nikolas ran to safety, Stavros confronted Luke Spencer. After an altercation, Stavros was left dangling over a bottomless pit. In a final display to thumb his nose at Luke, Stavros threw his hands into the air and fell backwards into the pit.

Though Stavros tumbled into an abyss, it didn't stop him from haunting Nikolas and Gia's dreams.

During the holidays in 2003, Luke had a Christmas Carol-type dream that included Stavros. During the dream, Stavros warned Luke that he was destined for the same fate as Stavros if he didn't change his ways.

In 2013, Luke and Laura's daughter disappeared and they set out to find her. Along the way, they were kidnapped and taken to Cassadine Island. Their captor was revealed to be Stavros. Helena had rescued him from the pit and he had spent years recovering on the island.

Stavros admitted that he had taken Lulu. Laura immediately offered to remain with Stavros on the island permanently in exchange for Lulu's freedom. Stavros explained that he was no longer interested in a future with Laura but instead pursued their past since Lulu reminded him of who Laura had once been. He assured Luke and Laura that Lulu would be remaining with him and that her husband was no longer an issue.

While Stavros bantered with Luke and Laura, Lulu's husband Dante discovered Lulu frozen inside a cryogenic chamber. Luke and Laura assisted Dante in reviving Lulu while Stavros warned them not to touch his "Ice Princess." Luke knocked Stavros unconscious and locked him inside of the frozen room while Laura turned down the temperature and left Stavros to freeze to death.

Unbeknownst to the Spencer family and the rest of Port Charles, Victor Cassadine arranged for Stavros to be revived from his cryogenic stasis. When Stavros regained his strength, he met up with Lulu and Dante and revealed that Lulu would carry his child. He explained that before he had frozen Lulu, he had harvested one of her eggs and created the embryo that would be their child. He injected Lulu with hormones to prepare her body for the implantation. However, Stavros was shot and killed by Dante before Lulu was impregnated. After Stavros' death, Helena took the embryo and vowed that Stavros would live on.

About The Actor: Learn more about Robert Kelker-Kellyk.

Family Trees: Scan the many branches of the Cassadine family tree.

THE BOLD AND THE BEAUTIFUL
TWO SCOOPS: Dishing the good, the bad, and everything elseB&B

THE BOLD AND THE BEAUTIFUL
Scott Bailey and Adrienne Frantz's 11-week-old hospitalized
May 23, 2022

THE BOLD AND THE BEAUTIFUL
INJURY REPORT: B&B's Katherine Kelly Lang breaks ankle, undergoes surgery
May 10, 2022
DAYS OF OUR LIVES

DAYS OF OUR LIVES
TWO SCOOPS: Dishing the good, the bad, and everything elseDAYS

GENERAL HOSPITAL
GH DAILY RECAPS: Get caught up on what happened Thursday on General Hospital

GENERAL HOSPITAL
GH's Lexi Ainsworth on why she's been M.I.A.
June 8, 2022
THE YOUNG AND THE RESTLESS

THE YOUNG AND THE RESTLESS
TWO SCOOPS: Dishing the good, the bad, and everything elseY&R

DAYTIME EMMYS
Mishael Morgan chats with Soap Central about her Emmy nom and connecting with her Y&R co-stars
May 24, 2022